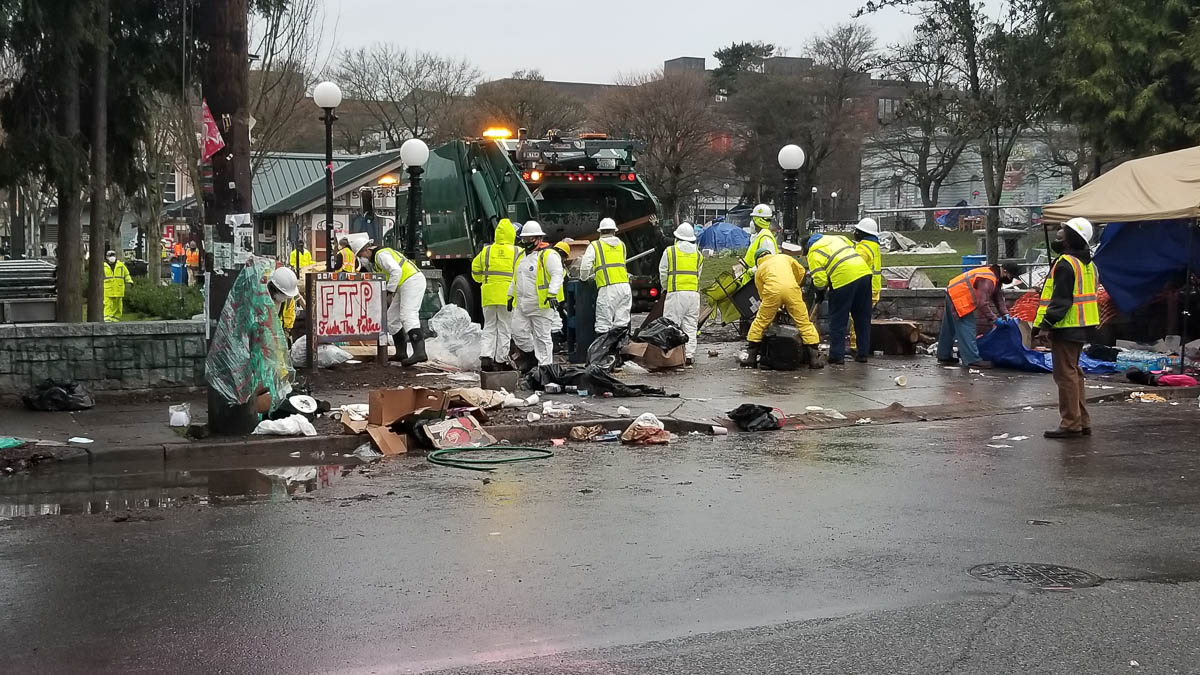 [SEATTLE] (Malcontent News) – At 7:34 AM on Friday, the LRAD announcements started that the unhomed and activists had 15 minutes to leave Cal Anderson Park. At day’s end, all that remained were 24 arrests, 32 clear trashbags of personal belongings, and at the most, 12 people place into semi-permanent or permanent housing. As darkness and cold rain fell over the park, SPD officers sat in cruisers parked on the ballfields with the park ironically barricaded by yellow tape.

According to Sgt. Randy Huserik, Seattle Police Public Information Officer, Seattle Police’s role on Friday was “to provide security for Seattle Parks Department employees.” During the 17 minutes between the first LRAD announcement to vacate the park and officers moving in, SPD declared a tent with resources for the unhomed was available on Broadway Avenue. When people went to the location, no tent or city employees were present.

In the minutes after the sweep, Malcontent News cameras walked through the cleared encampment and found no one checking belongings. At 8:59 AM, a convoy of city vehicles and garbage trucks arrived. Eleven minutes later, park employees started moving through the shattered compound. Ninety minutes after that, dump trucks and backhoes were pulverizing belongings and tents. The city should have saved items, including undamaged plastic furniture, tables, and bicycles, that witnesses saw thrown away. City officials indicated that 32 clear plastic bags of personal belongings were available to be claimed by their owners.

According to KOMO, a local ABC affiliate, 51 people who were unhomed at Cal Anderson Park were “referred” to possible housing solutions in the days leading to the raid. In the same report, the city stated eight received referrals to tiny homes or hotels, 6 to youth or young adult shelters, 32 more to hotels, and one went back to Olympia. The city could not provide information on the other three placement referrals. At the most, 12 received referrals for semi-permanent or permanent housing or secured their own solution based on that information. Youth and young adult shelters only provide temporary placement. Hotel vouchers aren’t permanent placements and typically last only for days. The disposition of the person who went back to Olympia is unknown.

The reality, as has been the case after other homeless sweeps, most of those removed will be back on the streets in the weeks to come. In another report on KOMO last night, the station asked their viewers if they thought the homeless would return to Cal Anderson Park. Ninety-five percent responded, “yes.”