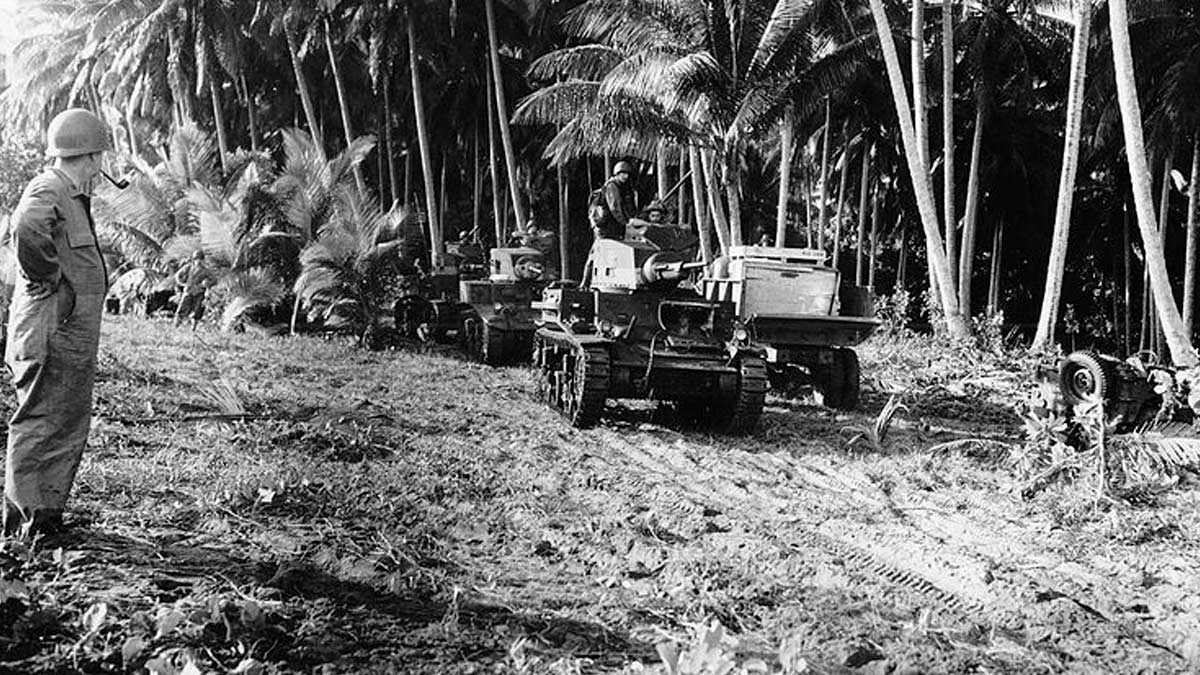 Ukrainian government and military leaders have acknowledged that a counteroffensive in the Kherson oblast has started, and evidence is mounting that the operation is gaining momentum. The dictionary defines counteroffensive as “an attack made in response to one from an enemy, typically on a large scale and for a prolonged period.”

For many, the word counteroffensive conjures up images from World War II and the Battle of the Bulge in the Ardennes or the Red Army’s response to Germany’s Operation Bagration near Minsk. Prepare to be disappointed for those expecting massive formations of troops and tanks rushing across the steppe supported by ferocious artillery barrages. The Ukrainian counteroffensive in Kherson will more closely resemble the United States World War II island hopping campaign in the Pacific than the plains of Eastern Europe or the deserts of Iraq during the first Gulf War.

Beyond Kherson city, most of the oblast west of the Dnipro River is sparsely populated. Small villages dot wheat fields across a flat landscape similar to rural Kansas or Nebraska in the United States. Settlements are spread out as much as 10 to 12 kilometers apart with almost no natural defenses or obstacles. Tree-lined dirt roads offer some cover, but the routes are obvious and easily observed. This area is tank country, and the terrain had Cold War strategic planners at the Pentagon and the Kremlin fretting during the last century. However, both belligerents have a problem.

Neither Russia nor Ukraine have many tanks to spare in a broad advance across the region. Ukrainian forces are reportedly training tank brigades for a future initiative and continue to have limited resources. Russia has lost up to a third of its active main battle tank resources in five months and was forced to dip into reserves of Cold War-era T-62 and T-80BV tanks to fill the gap. Armor is armor, but the main gun on the T-62 has a range of 1,700 meters, making it particularly vulnerable in a tank-on-tank battle and against light infantry weapons with greater range.

Unlike the Ardennes, Minsk, or the desert southeast of Baghdad, militaries worldwide have ready access to consumer, commercial, and military drones that can monitor troop movements and concentrations in real-time. There aren’t any widescale surprise attacks that will or can happen in Kherson. Without an overwhelming number of tanks, drone-directed artillery fire will shred company-sized formations as they attempt to traverse open areas.

The United States Pacific campaign used an island hopping strategy in World War II to defeat Japan. After the battle of Midway, Japanese forces were operating defensively as the United States Navy and Marines ground down island garrisons. Part of the strategy was to capture strategic locations where further attacks could be launched while bypassing other islands with less strategic value. In Kherson, the wheat fields are oceans, villages are islands, patrols and small groups of armor are destroyers and submarines, drones are the aircraft and the infamous kamikazes, and artillery positions are battleships.

Ukraine has started its first island hopping campaign, with Vysokopillya as Guadacanal and Kherson as Okinawa. Continuing with the Gudacanal analogy, Potomkyne is Florida Island, and Olhyne is Savo. Ukrainian forces are fighting for control of Arkhanhelske and are advancing on Novopetrivka. To supply the Russian troops still in Vysokopillya, it is 11 kilometers across roadless open wheat fields to Veremiivka, where Ukraine artillery holds fire control.

The “battleships” (artillery) make the supply efforts dangerous across an open sea of wheat. Ukrainian forces are preparing for a broader “beach landing” on the city limits of Vysokopillya while “destroyers and submarines (tanks and light infantry) block a potential retreat route toward Novopetrivka. Russian troops are still clinging to the “island” of Arkhanhelske. The Russian “battleships” (artillery) can’t redeploy to concentrate on Vysokopillya and stem the advancing “naval convoys” closing in.

Because neither belligerent can develop air supremacy and lack enough tanks and, more importantly, trained tank crews, this scenario will play out repeatedly in the coming months. Ukrainian military leaders will consider the strategic value of each settlement between Vysokopillya and Kherson and whether there is a need to secure the next “island,” or bypass it and let a lack of supplies wither away Russian garrisons trapped in small villages.

Part of that assessment will almost certainly be how many “battleships” (artillery) are around each settlement and the risk versus reward of an attempted beach landing. Ukraine will not leave any force behind the main line of conflict that would pose a serious risk to supply lines or the offensive itself. However, small defenses in a town that once housed less than 100 people could be a distraction to the primary goal.

Just like in the Pacific theater of World War II, the offensive will start slowly. As Ukraine advances further, if they employ a solid strategy and manage its resources, capabilities will increase as more firepower is concentrated on a shrinking front. Russian forces west of the Dnipro also have the same problem as Imperial Japan.

In 1941 the Japanese Imperial Army had 1.7 million soldiers compared to the United States with 200,000. By the war’s end, the Allied forces in the Pacific had swelled to 4 million troops. At the same time, Japan was reduced to one-million soldiers, primarily old and young conscripts in territorial guard units preparing to defend the main island.

By 1943, Japan was suffering from widescale supply issues. Not much press or pages within history books have discussed United States submarines’ roles in the Pacific, but supply interdiction became an untenable problem. Ukraine is vigorously concentrating on disrupting Russian supply lines throughout and into Kherson, and it is starting to have an impact.

In comparison, allied forces only got stronger through more manpower, increased weapons output, technological improvements, cracking Japanese codes, the implementation of combined arms combat tactics, and the ability to be constantly supplied. Japan’s response to these deficiencies was to waste light infantry and pilots and their supporting equipment with no meaningful way to replace the losses. While these tactics caused some of the worst casualty rates in World War II, they only delayed the inevitable.

The destruction of two of the three bridges across the Dnipro and severely damaging the third have created a similar situation in Kherson. The makeshift ferry that’s been established adjacent to the destroyed Antonovskiyy Bridge isn’t capable of carrying enough rations to feed the garrison of 15,000 Russian troops in Kherson city. Munitions such as TELAR, Grad, and Smerch rockets will be even more challenging to move in significant quantites, let alone diesel fuel and gasoline for tanks, infantry fighting vehicles, and trucks. For now, Russia has no meaningful way to replace the loss of armored vehicles or larger artillery pieces.

Airlift by helicopter can manage small arms ammunition, potable water, and food. But artillery rounds, rockets, and fuel are likely out of reach. Ukraine holds air dominance in the region, which will make widescale Russian resupply flights even risker.

Both belligerents are deficient in main battle tanks. However, Russia is having a more challenging time replacing losses, and the replacement vehicles are older weapons systems with inferior armor, sites, and main guns. Ukraine has commitments from allied partners to provide up to 600 more main battle tanks. While not as modern as the Russian T-90 or American M1A2 Abrahams, the upgraded T-72 variants promised are still capable of outgunning the T-62 and have better technology than the T-80BV.

For Ukraine, bringing new equipment to the front is only harassed by imprecise Russian long-range missiles and airstrikes closer to the line of conflict. If Russia plans to ferry across a tank, it requires three support trucks and one fuel truck. Additionally, those trucks need somewhere to go to collect ammunition, rations, potable water, field medical supplies, and fuel. For Russia to do it right, the four pontoon ferry can only haul four tanks a trip, with supporting vehicles and supplies. Even then, resupply will take days, if not weeks, at four pontoons at a time.

Unless Russia can reestablish the bridges across the Dnipro and regain fire control, these logistical problems will only worsen. As Ukraine hops from each island in the wheat fields, the supply situation will continue to degrade, and like the Pacific Campaign of World War II, the advances will start to accelerate.

This process will take months, and when mud season starts in September or early October, travel will be limited to established improved roads until the snow and freezing temperatures come. By then, Russian forces awaiting their fight in towns and villages closer to Kherson will deal with supply shortages and the difficult choice between fighting to the death, attempting to break out and retreat to the next village across kilometers of open terrain, or surrendering. Ukrainian commanders will have to manage the losses of troops and equipment. Larger villages and towns, the ones most likely required for the “island hopping” campaign to succeed, will have strong defensive positions established and the benefit of firing on advancing forces that have to move in the open. Like beach landings in the Pacific, destroyers, battleships, and aircraft can only provide so much cover for advancing troops moving to the edge of established defenses. In 2022, that would be tanks, artillery, MLRS, and drones.

The counteroffensive to secure the western third of the Kherson oblast has started, but there are a lot of islands to hop across a sea of wheat before Kherson city is reached. The first few advances will take time and result in heavy losses for both sides. Eventually, Russian defenses will reach a culmination point and start to collapse.