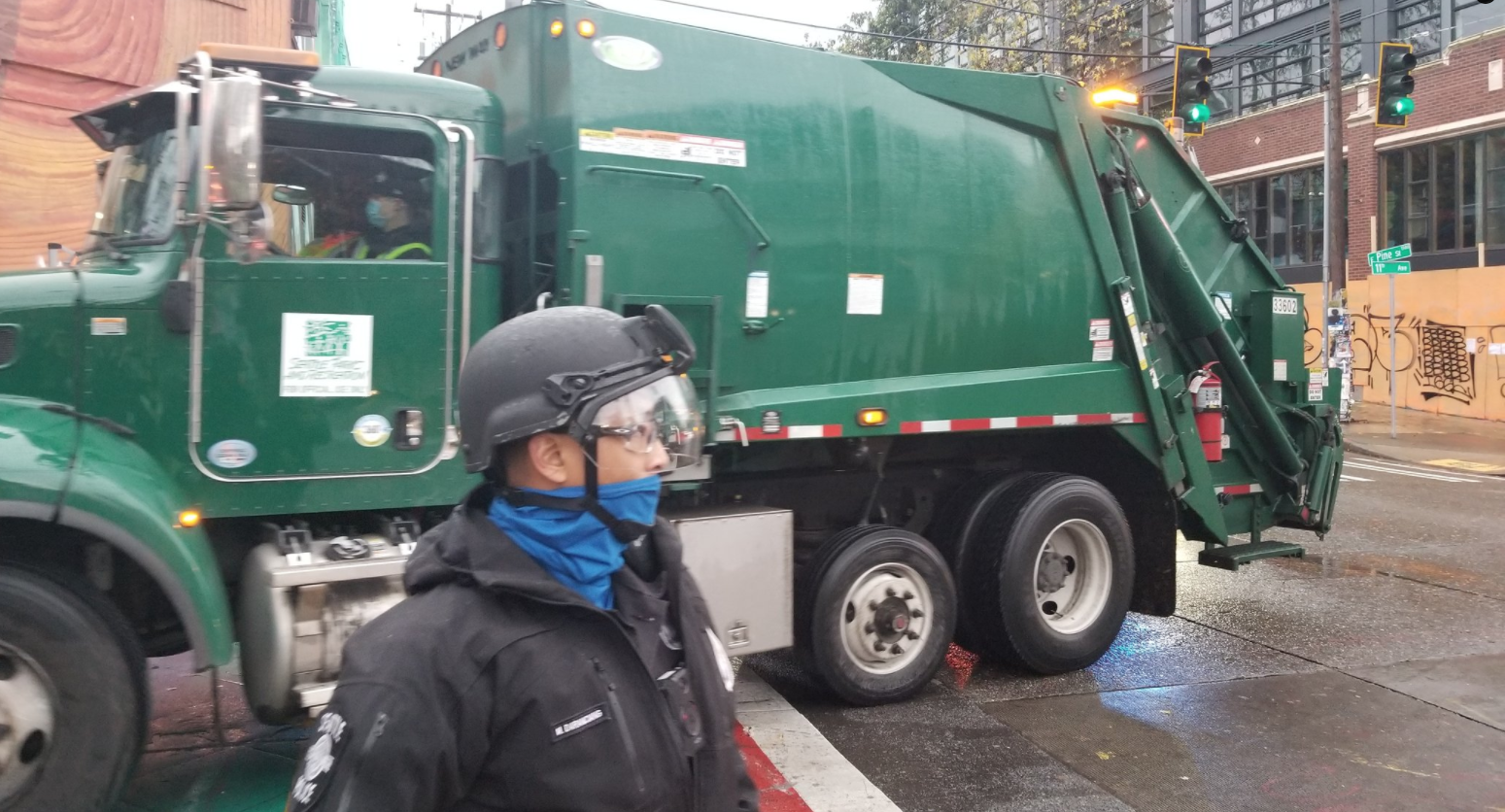 [SEATTLE] (Malcontent News) – Seattle Police Department, supported by King County Sheriff, executed a homeless sweep of Cal Anderson Park this morning, arresting 21. As the first glint of daylight appeared over cold and wet Cal Anderson, Seattle Police arrived at 7:34 AM. Using an LRAD, SPD made multiple announcements that people within the park had 15 minutes to vacate or face potential arrest. By early afternoon the park was clear, and Seattle Parks was well on its way to removing the encampment.

Activists had built a network of barricades over the weekend and steadily reinforced them over the week. On Wednesday, Seattle Police had planned to do a sweep but at the last minute changed direction. Later in the morning, Ada Yeager filed a temporary restraining order request with the federal court, looking to block the sweep. On Wednesday afternoon, activists took over an empty home on Denny, close to the northeast corner of Cal Anderson. On Thursday afternoon, U.S. District Judge Richard Jones denied the TRO.

Overnight on Thursday, there were two attacks on the homeless encampment. A person threw an explosive device at a parked vehicle in an incident described as a targeted attack. Seattle Police described the incident as arson. There were multiple reports of either fireworks or a flaming arrow shot into the encampment, with no reported injuries.

On Friday morning, black-clad protesters again started to gather in anticipation of the sweep. Seattle Police made multiple announcements for people to vacate the park or face arrest and stated a tent was available on Broadway Avenue for the unhomed to get support and information. At 7:52 AM, SPD moved in from multiple directions, with bike officers coming from the north and combined resources from the south. Simultaneous, a SWAT team raided the abandoned house on Denny.

Many expected strong resistance from the contingent of protesters and the estimated 30 to 50 homeless within the encampment. An opposition that never materialized. Seattle Police swept through quickly, tearing through the barricades on three sides. By 8:25 AM, the park was mostly quiet, beyond the King County Sheriff Department helicopter overhead.

In Thursday’s court hearing, city officials assured the federal court it had a plan for gathering and returning personal property after the sweep, per the Seattle Times. City representatives indicated they would only throw-away items that were damaged, wet, or soiled. Judge Jones expressed concern, indicating accurately that in December, everything is wet in Seattle. At 9:10 AM, a convoy of vehicles arrived, including multiple garbage trucks. It soon became apparent as workers tore down tents without doing any documentation that nothing would be spared.

During the raid, witnesses reported seeing Seattle Police destroying food, clothing, and medical supplies at mutual aid tents set up on 11th Ave, and breaking glass could be heard. There appeared to be no effort to document or collect any personal belongings by officials. By late morning, another convoy of heavy construction equipment arrived. Backhoes started chewed through tents, sleeping materials, furniture, and bikes, tossing them into the back of awaiting dump trucks.

Questions have arisen about police conduct, with a citizen video provided to Malcontent News. In the video, SPD placed an individual in a chokehold during an arrest. In the video, citizens plead with SPD to stopping choking the suspect. Despite Seattle Police claiming there was a tent with resources for the unhomed on Broadway Ave, no tent or representative was there. In talking to the incident PIO, they indicated they did not know what resources were available.

Through public and private investment, the city of Seattle spends over $1 billion a year on homelessness. Despite a decade long effort, Seattle now has the third-largest homeless population in the United States.