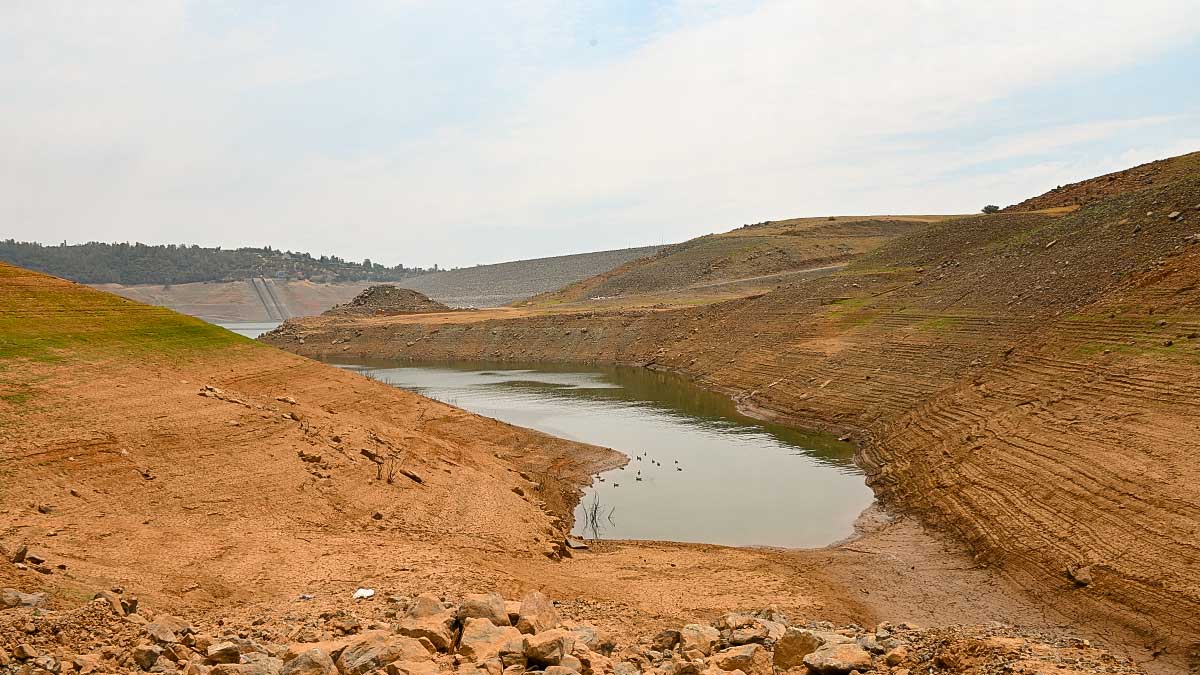 [OROVILLE, Cali] – (MTN) Lake Oroville is less than two feet above an all-time low while Lake Shasta is at its fourth-lowest level on record as historic drought grips the western United States. Lake Shasta continues to be shrouded in smoke from the Lava Fire, where the water sits 145 feet below full pool. At 921.93 feet above Sea Level, Shasta sits at about the same level it was in January 2016. Lake Oroville is at 646.63 feet, just 19 inches higher than a record set in 1977.

At Oroville, operators need to continue water flowing to support fisheries and farmers in the San Joaquin Valley that rely on water from the Sacramento River for irrigation. The river is already dealing with record high temperatures that have devested wild salmon, and the intrusion of saltwater upstream adding pressure to the ecosystem and farmers.

The historic low levels have forced over 140 houseboats out of the lake, and only one temporary gravel boat ramp remains operations around the entire lake. Even that ramp is in danger of closing as the level is expected to continue to drop another 25 to 30 feet by October.

The Edward Hyatt Pump-Generating Plant is capable of generating 132 megawatts of power during peak operation. Although up to 17,000 cubic feet of water can flow through the plant per second, approximately 6,000 cubic feet can be recovered and pumped back into the lake. The outflow is captured in additional reservoirs to be sent into the Sacramento River basin and support the needs of farmers to the south. Under extreme conditions, water is sent out to the Yuba River. The water level is expected to reach what hydrologists call deadpool, and the hydro plant may have to close for the first time in its 53 year history.

Lake Shasta, outside of Redding, sits below the headwaters of the Sacramento River and also generates hydroelectricity.

To the north outside of Klamath Falls, over 300 homes have had their private wells run dry, leaving residents without water for farming and personal consumption. Demand for water delivery and drilling companies has driven up costs and lead time, while some communities are providing water at pickup points. Ranchers and homeowners are looking to drill deeper, but after twenty-two years of mostly drought-filled years, there are no assurances those wells won’t run dry.

In the Klamath, a perfect storm of climate change, overutilization, treaties with first nations, and too many promises by government officials have come to head. Some have resorted to stealing water from the district, with complaints of illegal marijuana farms in the area. In this hardscrabble area with an undertone of independence and anti-government sentiment, other operators are also taking water pitting neighbor against neighbor.

Tule Lake on the Oregon-California border is divided into four regions. The most visible at the beginning of the road to Lava Beds National Monument has been allowed to drain dry. The soil deeply cracked and baking under the relentless heat. In the early 1900s, Tule Lake was significantly drained to create the farmland that surrounds the area today. Operators elected to let the most visible part of the lake complex run dry, in an attempt to convert it into a more productive marshland when and if the water returns. Area residents are skeptical and some are complaining about dust and irritation coming from the evaporating mud puddle.

To the north Upper Klamath Lake is the largest freshwater body in Oregon. The shallow lake has suffered from declining water quality for decades, both from natural and manmade influences. In 2001, water was cut off from farmers by the Bush Administration to protect native suckerfish that are on the endangered species list and protect area salmon per First Nations treaties. The impact was devastating to farmers who depend, and hold contracts for water rights.

Upper Klamath Lake is shallow – just 8 feet on average and a maximum depth of 50 feet. Although the lake currently sits at 100% of the normal level today, it has been steadily declining since 2019. Increasing temperatures, agricultural runoff, and naturally occurring chemicals turn the lake green with algae blooms.

Farmers aren’t just facing a shortage of water, they are also facing a shortage of forage and feed for livestock. The cost of hay has skyrocketed adding additional pressure on the battered finances for the region. Tariffs, a reduction in international shipping, depressed prices, have forced some to send animals to market early, getting only pennies on the dollar for their efforts while costs keep going up.

In Utah and Arizona, fear and frustration are mounting at Lake Powell. The lake is only inches from setting a new historic low, beating the record set in 2005. Frustrated locals are growing increasingly angry.

Glen Canyon Dam is the second-largest hydroelectric generating facility in the Southwest, only behind Hoover Dam outside of Las Vegas. The dam generates 1,320 megawatts of electricity, enough to power 400,000 homes. Rapid population expansion in Arizona and Utah has driven up demand as the water level continues to decline. A shutoff of the outflow through the dam would cut off a critical electrical source increasing rates, and potentially plunging communities into darkness. Officials believe the water level at Lake Powell will continue to drop until the spring of 2022 and is dependent on significant snowfall in the Rockies to stage any kind of recovery.

Misinformation on the Internet also abounds with complaints that water is flowing out of Lake Powell and Lake Mead unnecessarily and out to the ocean in California. Both lakes are on the Colorado River, which reaches the Gulf of California in Mexico, where international agreements also require water for the nation on the United States border.

In Walla Walla, Washington, city officials have had to tap one of seven wells to supplement the city water supply. Under normal conditions, water would come from Mill Creek, but extreme drought coupled with extreme demand has forced the city to tap the backup supply. There is enough water in the reserves to supply the city for “several years,” according to officials. The area is known for its wine production. Some growers are reporting up to 50% of their crops were lost in a late June heatwave, that saw temperatures soar to 110 to 115 degrees F. This is the second hit in a row for grape producers who saw some of their harvests destroyed last year by “smoke taint” a growing concern as increasing smoke from wildfires in Washington and Oregon start to creep into the region.

In a cruel twist, a heavier than normal monsoon season has sent floods sweeping through parts of Utah and Arizona. The land has become so baked it can’t absorb the water, so flash floods tear through parks, deserts, and communities offering little in the way of adding to the water supply. In Washington and parts of Oregon, it appears rain is coming next week, but lightning will be included in some areas, increasing wildfire risks in regions battered by the confluence of climate change, government policy, and overuse.

After 50 days and 50 nights finally some rain in sight