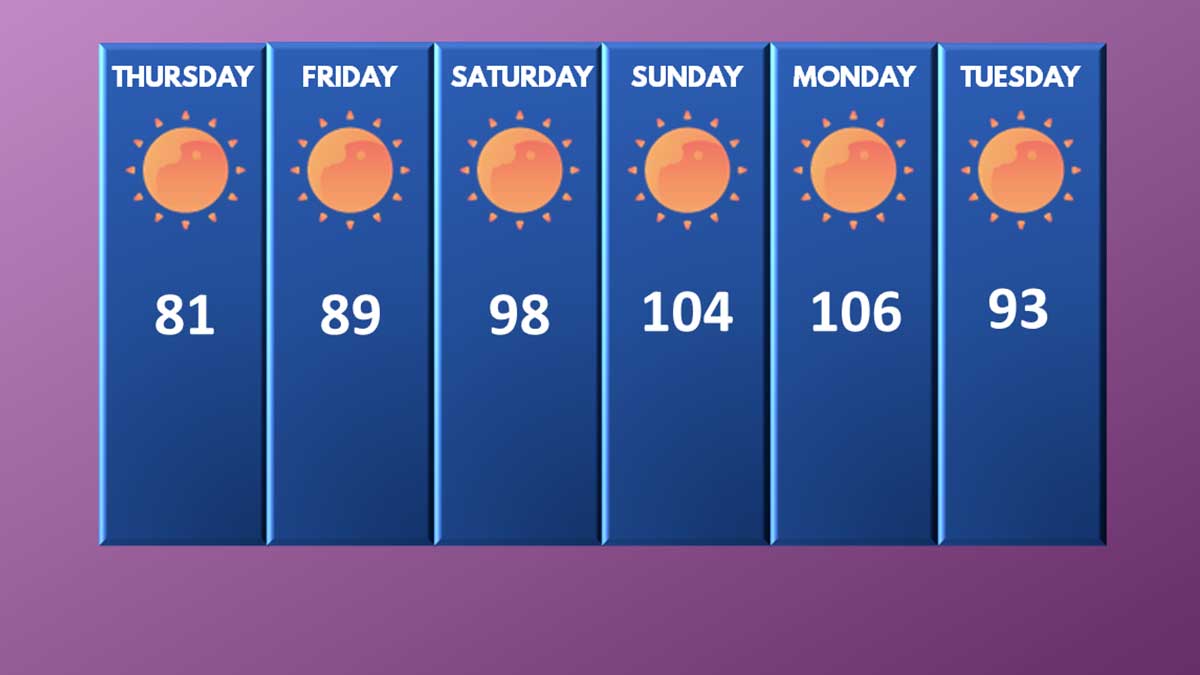 [KIRKLAND] – (MTN) Meteorologists around the world have their eyes on the Pacific Northwest as an unprecedented and historic heatwave will send temperatures to dangerous levels never seen in the Seattle area. A strong upper-level ridge, an area of high pressure, is building off the coast of Washington and will park over British Columbia this weekend. Forecasting models have been consistent for almost a week, and what was disbelief a few days ago has turned into shock.

Hot will it get? Seattle will be hotter than Miami, Houston or Jerusalem, and forecasted temperatures will rival Yuma, Arizona and Cairo, Egypt.

During a typical heatwave, like the one the region experienced in July 2009, an area of high pressure forms over the four corners region of the United States and drifts northwest off our coast. These systems create an onshore flow, pulling dry warm air from eastern Washington into the Puget Sound lowlands and blocking the cool marine air of the Pacific Ocean.

East winds send air down the Cascades causing the air to compress. The compression squeezes out the moisture and warms the air, giving us our 90 plus degree days in the lowlands, and sometimes very strong winds in the foothills in towns like North Bend and Issaquah. For our coming heatwave the location of the ridge, how fast it is building, and how intense it is, has never occurred.

Normal highs for June are the high 60s to low 70s, so even our “cool” day on Wednesday with a high of 77 was above normal. Thursday will be pleasant before the blowtorch is pointed at the region.

Thursday: The marine layer and low clouds that came in this morning didn’t push as far inland as yesterday. Today will be sunny with some possible high clouds north of the Kirkland-Bellevue-Woodinville area. Temperatures will be 79 to 83 degrees.

Thursday Night: A marine layer will try to push in from the coast one last time, but it won’t make it to our area. It will be partly cloudy before dawn, with temperatures from 59 to 63.

Friday: The onshore flow will start and intensify through the day. Friday will be similar to Monday this week with sunny skies and temperatures from 87 to 91 degrees. Winds will be light.

Friday Night: With high pressure building to our north, hot air from the desert southwest will flood into our region. Friday night lows will be 64 to 68 degrees under clear skies.

Saturday: Hot air will entrench into the region, sending temperatures soaring. The further away from the water and south you go the hotter it will get. Highs on Saturday will be 97 to 101 in the Kirkland-Bellevue-Woodinville area. It may be slightly cooler right on the shore of Lake Washington. Our hot spots like downtown Bellevue, Totem Lake, and Kingsgate will see the highest temperatures. Saturday’s record high is 93 degrees set at the Federal Building (91 at SeaTac Airport), and both records will be smashed. The all-time record high for June is 98 degrees, and that record is at risk. If it doesn’t get broken on Saturday, it will get destroyed on Sunday.

Saturday Night: The ridge of high pressure will continue to intensify, providing little relief from the heat. Low temperatures will be record-setting, dropping only to 69 to 73 degrees under clear skies.

Sunday Night: Historically hot with the highest low temperatures in Seattle history. Lows will be 72 to 76 degrees under clear skies with no wind. The heatwave is happening during our longest days of the year, with less than 8 hours between sunset and sunrise, offering little respite from the heat.

Monday: Unprecedently hot with historic and dangerous temperatures. Highs will soar to 103 to 107 degrees under cloudless skies and light winds. The record high for Seattle is 91 degrees and will be shattered.

Monday Night: The ridge of high pressure will finally start to move eastward, allowing cooler air from the coastline to moderate our temperatures. Temperatures will be 65 to 69 degrees under mostly clear skies.

Tuesday: Temperatures will still be 20 to 25 degrees above normal. Highs temperatures will reach 91 to 95 degrees. The record high for Seattle is 93 degrees and will be at risk of being broken.

The King County Fire Marshall has issued a stage 1 fire safety burn ban effective Thursday until further notice for unincorporated areas of King County. For the Kirkland-Bellevue-Woodinville area, sections of Woodinville are impacted. The ban applies to “all outdoor burning, except for barbecues and small recreational fires in established fire pits at approved campgrounds or private property with the owner’s permission.” An approved fire bit is 25 feet from all structures, 20 feet away from overhanging branches, has no vegetation within 10 feet, is no more than 36″ across, and is made of concrete or metal. The fire must be attended at all times and must be fully extinguished.

King, Pierce, Kitsap, and Mason counties are under a level 4 burn ban until further notice due to moderate fire danger. Industrial fires are banned, and only recreational fires are allowed and must be attended.

Grays Harbor, Jefferson, and Clallam counties are under a level 2 burn ban until further notice due to moderate fire danger. Rule and permit fires are banned, industrial or debris fires are not allowed, and campfires are allowed only in designated campgrounds on DNR land.

Lewis, Cowlitz, Clark, and Pacific counties are under a level 4 burn ban due to moderate fire danger starting Friday, June 25, until further notice. industrial or debris fires are not allowed, and campfires are allowed only in designated campgrounds on DNR land.

Chelan and Wenatchee counties are under a level 4 burn ban due to high fire danger. Rule and permit fires are banned, industrial or debris fires are not allowed, and campfires are allowed only in designated campgrounds on DNR land.

Area officials aren’t concerned about the power grid and its ability to keep up with demand. Seattle is the least air-conditioned city in the continental United States, with only 33.7% of Seattle homes equipped with central air or a room AC unit, compared to 89% of the United States. Many office buildings and commercial spaces remain empty due to COVID restrictions.

Oregon officials are more concerned particularly in the Portland area where 70% of homes now have air conditioning. PGE in Oregon has stated they are ready for the surge in demand and do not anticipate a need to do rolling blackouts in northern Oregon. Temperatures could reach over 110 degrees Saturday to Monday in Portland.

How you can keep it cool during this weekend’s heatwave