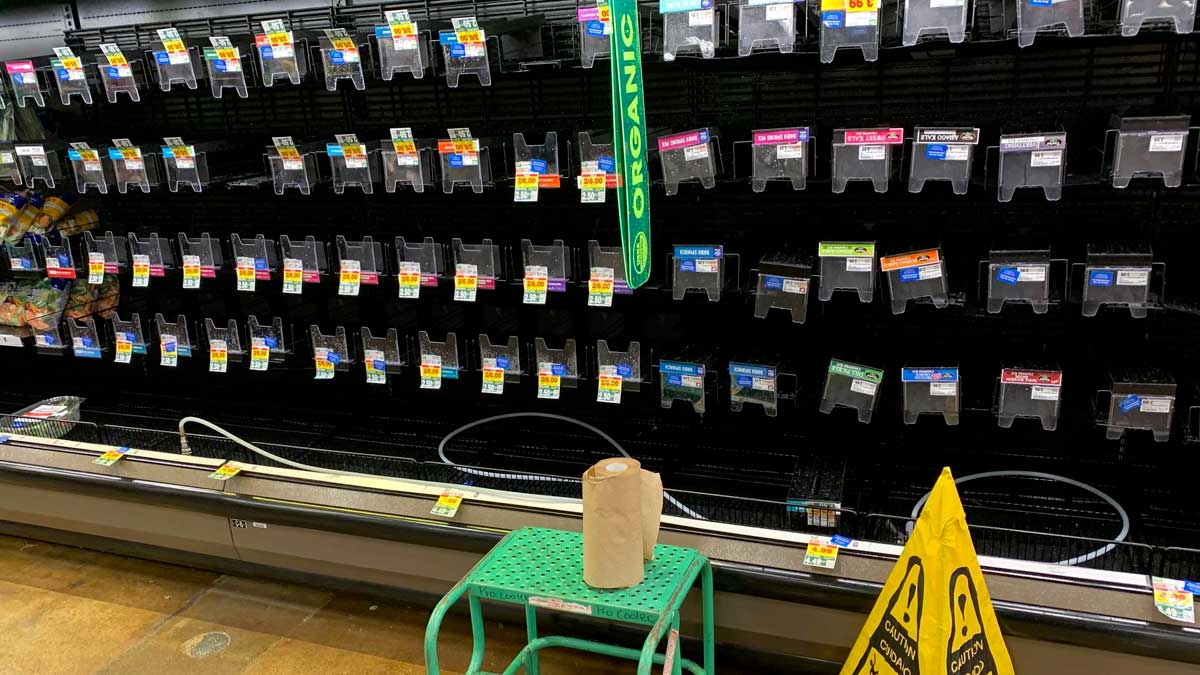 Shortages of cold medication and home rapid COVID tests have grown to include fresh produce, milk, pet food, and some dry goods. Shortages are spotty and vary across stores. In Seattle, social media and pictures show empty dairy sections. In Kirkland, Fred Meyer had plenty of milk, eggs, and cheese but very little fresh produce.

The holiday buying season both for goods and food products arrived just before a snowstorm and historic cold blanketed the region. The timing combined to empty shelves for some, but by New Year’s many locations had recovered.

The COVID variant Omicron is sickening a record number of people, with worker shortages across every sector from hospitals to warehouses. With national unemployment at a robust 3.9 percent, the nation was already deep into a worker shortage before the ongoing coronavirus surge.

The trucking industry is short over 80,000 drivers nationally. Drivers are typically paid by the mile, and go unpaid when they aren’t moving. Labor shortages at warehouses and distribution centers can leave bulk freight motor carriers waiting for hours, and sometimes days without pay. Additionally, trucker pay has declined 50 percent in the last 20 years, forcing experienced drivers to leave the industry. Long-haul bulk freight has suffered the most, with many drivers wanting better pay or assurances they will get to sleep in their own beds at night.

Tracking technology has turned into a double-edged sword for the freight industry. The same systems that monitor driver behavior, safety, and location, have created a Fifth Element style driving environment. As an example, if a driver is moving in a freight yard or loading dock and exceeds 5 MPH, tracking systems will consider that movement as travel. If the driver is only moving their vehicle but on a mandatory rest window, they get penalized. Drivers have complained that getting stuck in traffic results in filling out online forms and explaining to dispatchers why they aren’t moving and on schedule.

Washington awoke on Friday morning to find the region was being pummeled by another once in a 100-year weather event. Heavy rain, flooding, and historic snowfall have crippled land transit into Puget Sound closing all mountain passes, stopping railroads, and for a short period this morning, closing a 20 mile stretch of I-5 in Lewis County. A similar weather system in December of 2007 crippled transit and disrupted the supply chain in Western Washington.

All mountain passes are closed until at least Sunday due to record amounts of snow, avalanche danger, landslides, and downed trees. Snoqualmie Pass has recorded 69 inches of snow in four-and-a-half days with more expected through Friday. Stevens, Whites, and Blewett Passes haven’t had updated snowfall reports since Jan. 5.

The same weather system that has buried the Cascades is causing historic flooding in South Puget Sound, Southwest Washington, and in communities such as Issaquah. The Washington State Department of Transportation was forced to close a 20-mile section of I-5 between Centralia and Chehalis on Friday morning, the first major closure due to flooding since 2007. The highway is temporarily reopened this afternoon, but DOT traffic cameras showed water lapping at the edges of I-5. The Chehalis River isn’t expected to crest until Friday night or early Saturday morning.

The Newaukum and Skookumchuck Rivers reached near-record levels. The Thurston County Sheriff was appealing for people to follow evacuation orders and not to ignore road closures. In Issaquah, a phase two alert was issued on Thursday, when the Issaquah Creek broke its banks. On Friday morning, floodwaters were slowly receding.

The timing of these disruptions has created a perfect storm for the delivery of goods into the region. By Friday evening, the only way in and out of Puget Sound, the Islands, and the Olympic Peninsula will be by boat or aircraft. Combined with a growing number of COVID cases sidelining more workers, Western Washington should accept more empty shelves in the days to come.

There is no such thing as Flurona or Deltacron

After a faculty revolt over the weekend, Seattle University moves to virtual learning due to COVID

Things are clearly not going well for the Russian military - Duma's proposal is to raise the age limit for military enlistment, now capped at 40 years old