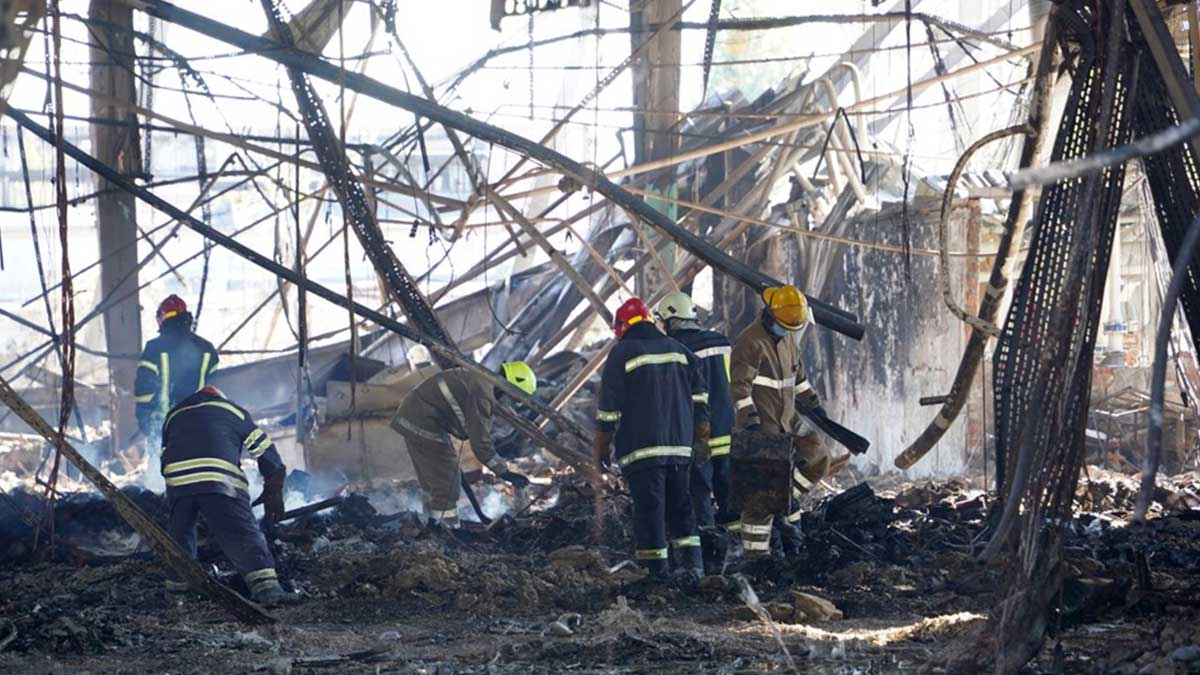 The Russian Air Force fired two Kh-22 land-to-sea cruise missiles from Tu-22M3 strategic bombers at Kremenchuk, Poltava. Both missiles struck the Amstor Mall at 3:52 PM local time, with over 1,000 civilians inside. On Wednesday morning Ukrainian officials reported that 20 were dead, 59 were wounded, and 36 were still missing. Monday’s attack is the worst since Russia destroyed the railroad station in Kramatorsk on April 8 with cluster munitions delivered by Short-Range Ballistic Missile (SRBM).

Lysychansk-Severodonetsk – Russian forces are holding a line that extends from Bila Hora to the southwestern corner of the rubber factory on the edge of Lysychansk. The line continues southwest to the gelatin factory, where fighting has been ongoing for four days.

Russian forces control most of Vovchoyarivka, with intense fighting continuing to control the settlement’s northern part. Russian forces have reached the southeastern edge of the abandoned Verkhnokamyanka oil refinery, which is adjacent to the T-1302 Highway Ground Line of Communication (GLOC – supply line).

Kherson and Mykolaiv – In Kherson, the Ukrainian counteroffensive continued. Ukrainian troops advanced from Soldatske to the western edge of Myrolyubivka. Russian and Ukrainian forces continued intense fighting to control Stanislav, Kyselivka, and Snihurivka. The United States Department of Defense and Ukrainian officials have hinted that “several” settlements were liberated between June 25 – 26 in the Kherson Oblast but have requested that the details be temporarily withheld to support Operational Security (OPSEC).

Kharkiv – North of Kharkiv, Russian forces launched an offensive to recapture Dementiivka, but they were unsuccessful. Skirmishes continued near Velyki Prokhody, Vesele [Kharkiv 50°10’26.3″N 36°31’59.5″E], and Rubizhne [Kharkiv]. Satellite data indicated that Ukrainian forces remain on the east bank of the Pechenihy Reservoir near Khotimlya.

Southeast of Chuhuiv, fighting continues along the M-03 and M-07 highways. The General Staff of the Armed Forces of Ukraine continues to request to honor OPSEC in this region. We will only share open-source intelligence in today’s report. Sattelite data indicated fighting in Russian-controlled Nova Hnylytsya.

Izyum – On the Izyum axis, Russian forces shelled Mospanove but made no advances on the settlement. Russian forces attacked Dovhalivka and Zalyman from Savyntsi, suffered significant losses, and were forced back. We have also been requested to honor OPSEC in this region and will only share information available through open-source intelligence.

Russian forces attempted to advance on Mazanivka from Dovehenke and were unsuccessful. Russian forces shelled Ukrainian positions in Dolyna and Bohorodychne. Ukrainian artillery interdicted the GLOC from Oskil to Sosnove with artillery.

We shouldn’t get involved, otherwise, it will start World War III