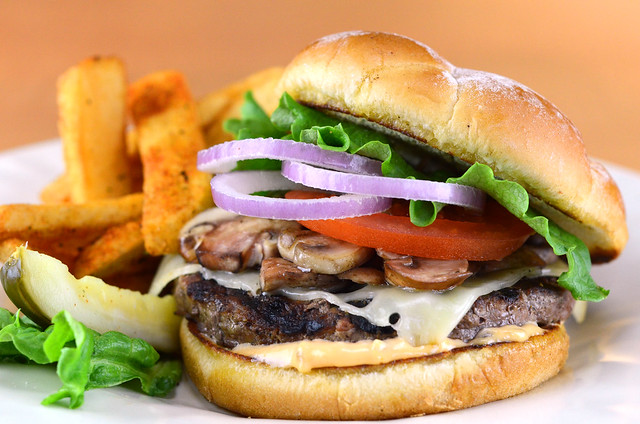 I had to go to a hospital yesterday for some long-planned imaging. There was a planned gap between my ultrasound so that radiology could create their report, and my doctor could review, and the post-exam consultation. My day yesterday was one of the frustrations of sitting in a car, sitting in traffic, sitting in a waiting room, lying still for 90 minutes, more sitting, getting slightly bad news, to then sit in the car in more traffic. I ended up doing my jogging in the unexpected rain shower that dumped on Juanita last night, but that’s another story.

During all of this hurry up and wait, a man has to eat. After my imaging, I had about 30 minutes to go down to the cafeteria and feed my head hole. My selections were a made to order salad, a “large” chicken noodle soup, a small side of beets (tossed in with the salad), and an unsweetened ice tea. When I check out the cost of my meal, with plain red wine vinegar for dressing was $12.31.

I couldn’t make my salad, a server went through the salad bar and provided my selections. My container consistent of spinach, romaine lettuce, white mushrooms sliced, three cucumber slices, four cherry tomatoes, diced onion, about a half-a-cup of sliced beets, and some canned, sliced black olives – you know the kind – the kind you get on a pizza at a cheap pizza place. My “large” soup was a 10-ounce cup that was also filled for me and left with a three-quarter-inch gap from where it was, filled, and the top of the container — total calories with two saltine crackers – 278.

Here is why I’m harping on this point. The “daily special” was a shishito pepper cheeseburger (errrr mer Gerd! Shishito peppers!!!) with waffle fries for $8.69. Yes there would be a meal tax on top of that and yes I bought an unsweetened ice tea, but both of those still don’t get the cost to $12.31. I would conservatively estimate the burger and fries at 750 to 800 calories, and that assumes I don’t lather the fries in sugar loaded ketchup or ask for some mayo on that burger.

I’m at a hospital. I’m at a hospital for cardiac reasons. Even at a hospital in the United States, it is cheaper for me to eat unhealthily, then it is to make a healthy choice. I paid 46 cents an ounce for what was 80% romaine and spinach, and a small one-ounce container of red wine vinegar. The worst part is the meager portion of soup was unsatisfying, and I found myself hungry less than two hours later. Of course, I was! At 278 calories intake, my basal metabolic rate would burn 170 to 190 calories if I was sound asleep, let alone under the stress of 5 PM U-District traffic and processing the news.

I have been fortunate to travel to other countries in the world, and the United States is one of the only places I have ever been where it is cheaper to eat highly caloric foods then it is to make healthy choices. The obesity epidemic we are in is a huge burden on the United States economy. Medical costs, lost productivity, lives shortened, growing disability claims, and from a strategic standpoint, a lack of military readiness.

During World War II, one-third of recruits showed up suffering from malnutrition. The term “getting into fighting weight” was born out of enabling inductees to eat what they wanted to bulk up. The national school lunch program was created after World War II to help prop up food prices due to surplus production and as a strategic government initiative to assure that there was a ready supply of young men who had grown up with proper nutrition for the draft. Now more than one-third of recruits show up so overweight, and out of shape, they can’t get through BASIC training and require weight loss and strength condition.

It is paradoxical that a hospital would essentially charge me more for making the right choices, and incentivize me to make unhealthy choices. Well, I guess it’s good for keeping patients in the system.