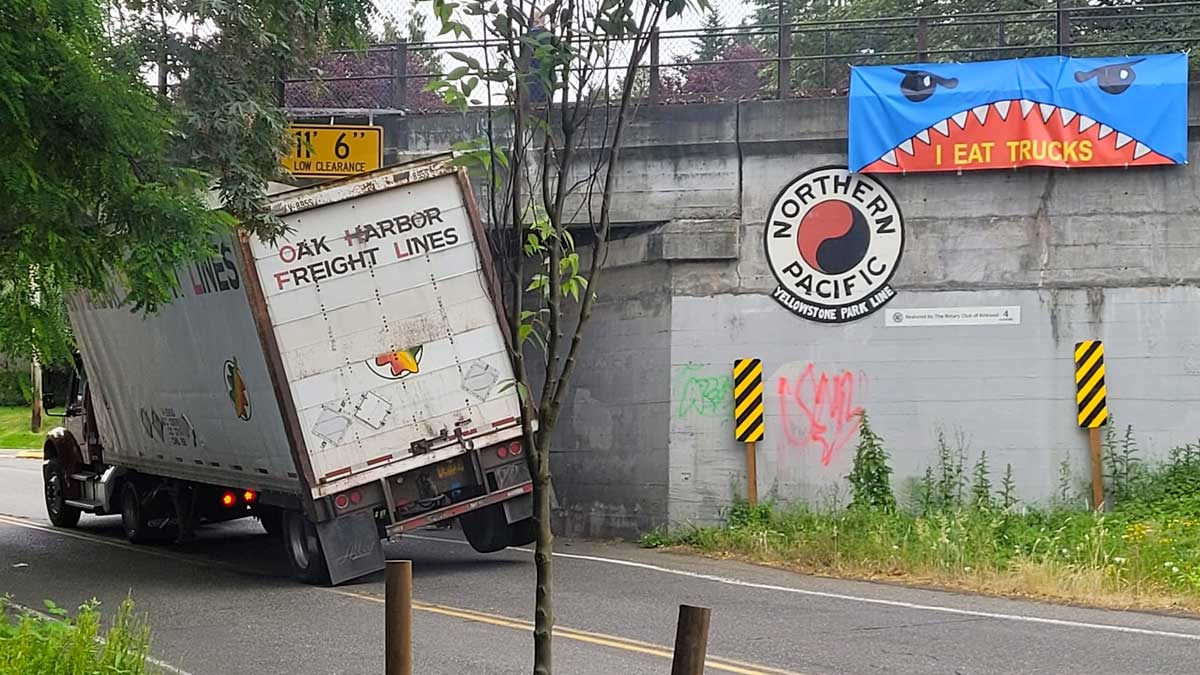 The bridge is located at a complex intersection with limited visibility approaches from both sides. The city of Kirkland has done numerous studies and made several improvements in 2020 in an attempt to warn truck drivers about the low clearance structure, to no avail.

Currently, there are more than a dozen signs and flashing warning lights on either side of the bridge.

In July 2021, local citizens made a banner declaring, “I Eat Trucks,” and strung it across the eastern side of the bridge. Two days later, residents in the area heard the squeal of brakes and expected it to be followed by the sounds of mangled metal, but there was no crash. The new banner was credited with its first save. A month later, the same group added a second banner after two bridge strikes occurred by westbound trucks.

In 2021, the bridge was on pace to be struck over 100 times, but by August, it seemed the banners had solved the problem. The bridge was hit a few times over the last year, but this is the first month where “Truckbane” has been struck twice.

It is too expensive to replace the bridge with a higher structure for the Cross Kirkland Trail. The roadbed can’t be lowered because there is a water main, communications, and electrical infrastructure under the bridge. The city is restricted by Federal Department of Transportation rules on what they can and can’t do to raise truck driver awareness as they approach the structure. Additionally for eastbound trucks, it is approximately 1/4 mile from 85th Avenue to Truckbane, further limiting the location and quantity of DOT-approved warning devices. The city reported a cable overheight warning device couldn’t be used for the bridge approaches on the west or east side. If the cable were severed by a truck, it could strike pedestrians on the sidewalks that follow Kirkland Way.

Kirkland police have the intersection closed at press time and are awaiting a heavy-duty wrecker to extract the truck.