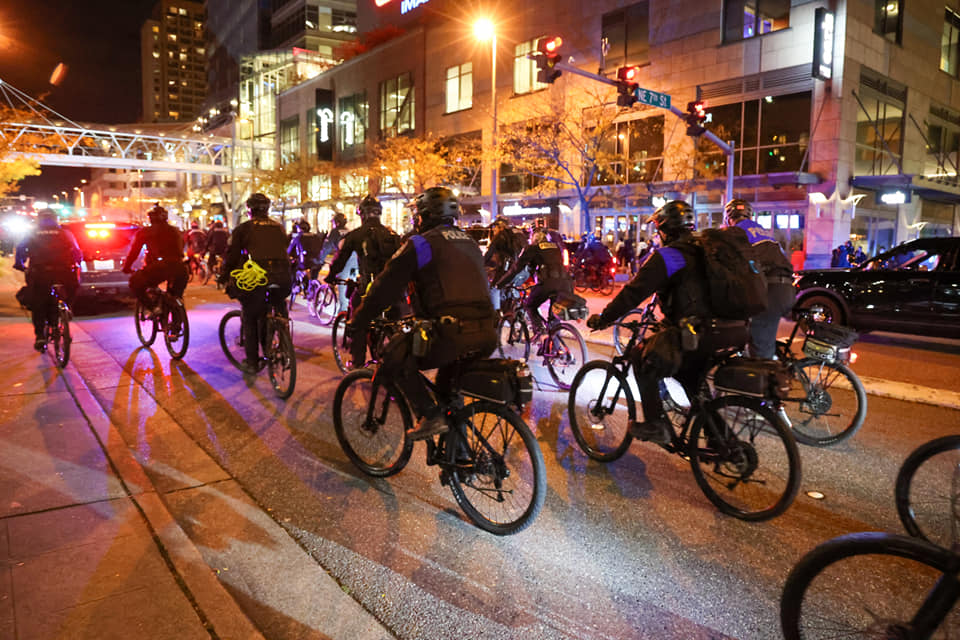 A flyer distributed online over the past week had stated the purpose of the march: “Bellevue is home to the richest people in the world — it’s time to wake them up…”

The group gathered at Downtown Park in Bellevue, WA, before marching through the downtown streets of the city. They chanted familiar slogans to those watching nearby, such as “Off your phones and into the streets.”

Several observers cheered as the marchers passed and some, dressed in their gowns, even left nearby bars and restaurants to join in. A baby could be seen marching as well as one woman who described herself as a “grandma.”

Not everyone was as enthusiastic. About 15 individuals also followed the march with their cell phones or cameras while live-streaming the demonstration. Neoconservative media personality Katie Daviscourt was among them.

Local initiative celebrity and former gubernatorial hopeful Tim Eyman was also walking alongside the police on the sidewalk. Supporters of Donald Trump, Loren Culp, and the police were out in force near the intersection of NE 8th Street and Bellevue Way NE. One young man on his bike yelled “race traitors” at some of the white marchers.

As the march continued downtown, a “civil emergency” was declared by the City of Bellevue. Cell phones on all sides suddenly lit up and the emergency alert tones filled the air. The notice read:

“The City of Bellevue has declared a civil emergency and enacted a weapons ban in the downtown area due to an imminent threat of injury to persons and property during protests tonight (Saturday). Please avoid the area.”

The march resulted in no significant property damage and bike officers only intervened twice to separate the marchers from their critics.

The biggest impact of the demonstration may be on the Bellevue economy and lost tax revenue. Many businesses closed early and hired private security at their own expense. A few businesses appeared to have also boarded up their windows. Furthermore, the overtime for the responding law enforcement agencies is likely to be significant.