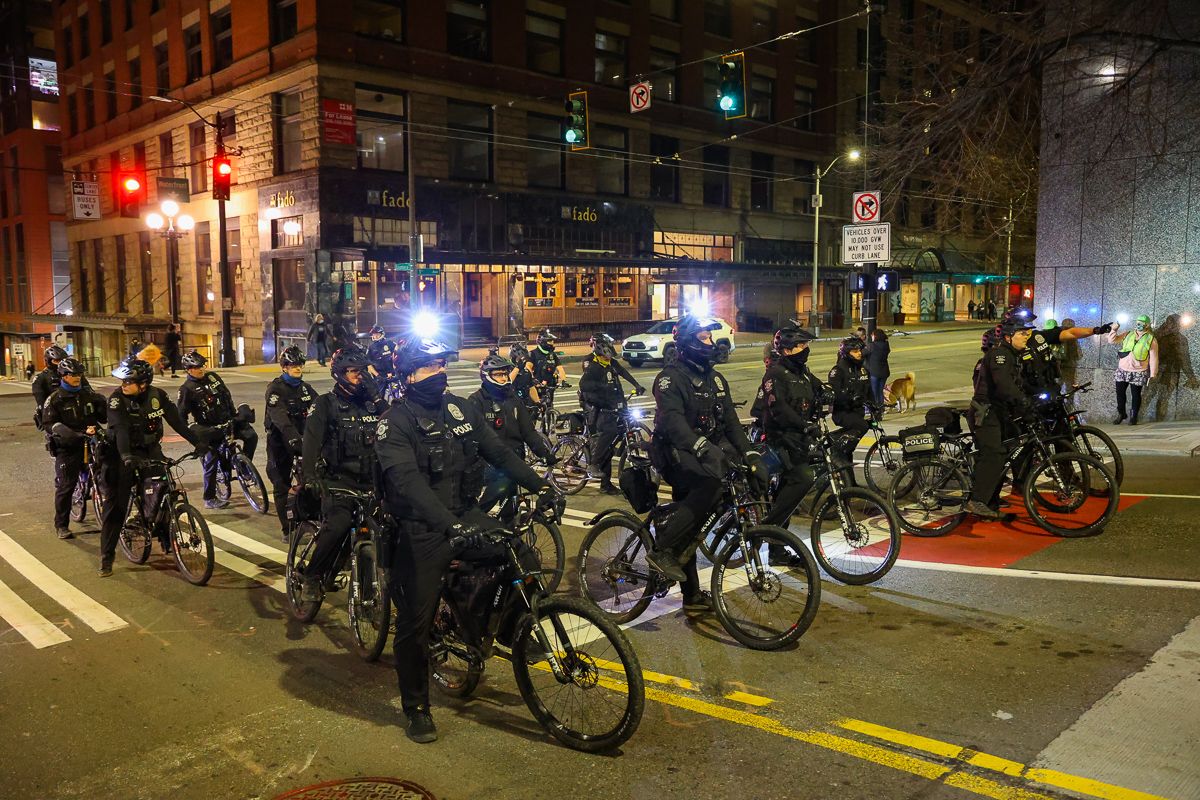 It became a tale of two cities as vigils and protests in honor of Breonna Taylor swept the United States on Saturday. Seattle and Portland both had vigils and marches with two very different outcomes from Direct Action marchers.

In Seattle, activists gathered outside Cal Anderson Park for a candlelight memorial and chalk art before marching into downtown Seattle. SPD met the group with a heavy and aggressive presence as they marched downtown and to the waterfront. Smaller groups splintered off and broke windows. The Seattle Police used a level of force not seen since November, resulting in fourteen arrests.

Later on Saturday, Direct Action protesters gathered in Occidental Park, where one of the activists chastized the group for lack of planning and poor tactics. KOMO released the video on Monday, and an infiltrator of the group allegedly filmed it.

Disagreements between the various protest groups in Seattle are well known and have spilled over into the public view on social media. Direct Action marches are described as a “venue” and are considered leaderless. An increasing presence by the Youth Liberation Front, an organization born out of Portland, vacillates between allowing independent journalists to tell their story and threatening violence against reporters.

Black activists, including those within Direct Action, have expressed the frustration of the coopting of the Black Live Matters message with insurrectionary anarchist tactics. In January, Black leaders in Tacoma condemned a protest that tore through Black neighborhoods.

Black leaders have expressed that any property destruction caused by insurrectionary anarchists gets blamed on Black Lives Matter and the Black community. The court of public opinion frequently conflates Black Lives Matter, Antifa, and anarchists into the same grouping. In reality, they represent three different philosophies with overlapping goals but use divergent tactics.

For example, systemic racism against the Black community has roots within corporate America, especially in banking and financing. Acknowledgment, correction, and compensation for wrongs against the Black (and BIPOC) are common goals. Some groups seek reform, another dismantlement, and others destruction. These critical differences are often lost within the message and actions on the street.

In contrast, Black leaders in Portland assembled for a vigil for Breonna Taylor. A group of about 100 gathered outside while maintaining social distance for a candlelight vigil. The vigil featured live music, speeches from Black leaders, and impacted family members. The details of the actions taken by Louisville Police and the multiple policy violations were outlined with documentation. Candles and flowers surrounded a large painting of Breonna Taylor as people paid their respects.

The group then drove to the Blackburn Bridge, where activists released 60 lanterns into the Columbia River to commemorate Breonna Taylor’s life. With musicians playing, a group of about 100 marched over a mile to the Federal Courthouse. When they arrived around 10 PM, Direct Action protesters had already gathered outside the courthouse for a third day. On Thursday, federal officials used pepper balls and tear gas, while on Friday, Portland police kettled about 100 people, including journalists, arresting 13.

As the Direct Action protesters painted graffiti on the boards covering windows and columns and probed for weak points, Black leadership demanded they stop. A heated exchange exploded between the two groups, with Black leaders expressing frustration that Portland’s continued violence does not support Black lives. Black activists repeated words heard last year that Black voices should be listened to when protests are happening to support Black lives.

Like in Seattle, the fissure between Black Lives Matter, Antifa, and anarchists was on full display. Some pleaded for the primarily white audience watching and listening to intervene and stop the direct action group. Some people moved to the courthouse sidewalk, and gradually most left the courthouse perimeter.

After the exchange, many left the area. As the night progressed, tensions rose several times, with announcements from the courthouse that those on the sidewalk were trespassing and could be subject to action. The sounds of rocks hitting the wooden barricades and windows filled the air multiple times. Music known to result in DMCA takedowns played in an attempt to blackout media coverage. By 1 AM, most had left, and not one Portland Police officer or federal agent made an appearance.

Twenty-four hours later, Portland police declared an unlawful assembly as Direct Action hit the streets again. On Monday, a coalition of Black leaders condemned insurrectionary anarchists in particular and put out a call for the tactics of property damage and threats to end.

Many expect an increase and larger protests in the coming months. Better weather, the anniversary of George Floyd’s death, the imminent decision on charges against police officers involved with Manny Ellis’s death, and the Jeff Nelson trial are all on the horizon.

A variety of groups and tactics will continue to be employed by different factions. If there is one thing the media should strive to achieve in those coming months, it is clearly differentiating between the groups, their tactics, and their goals.