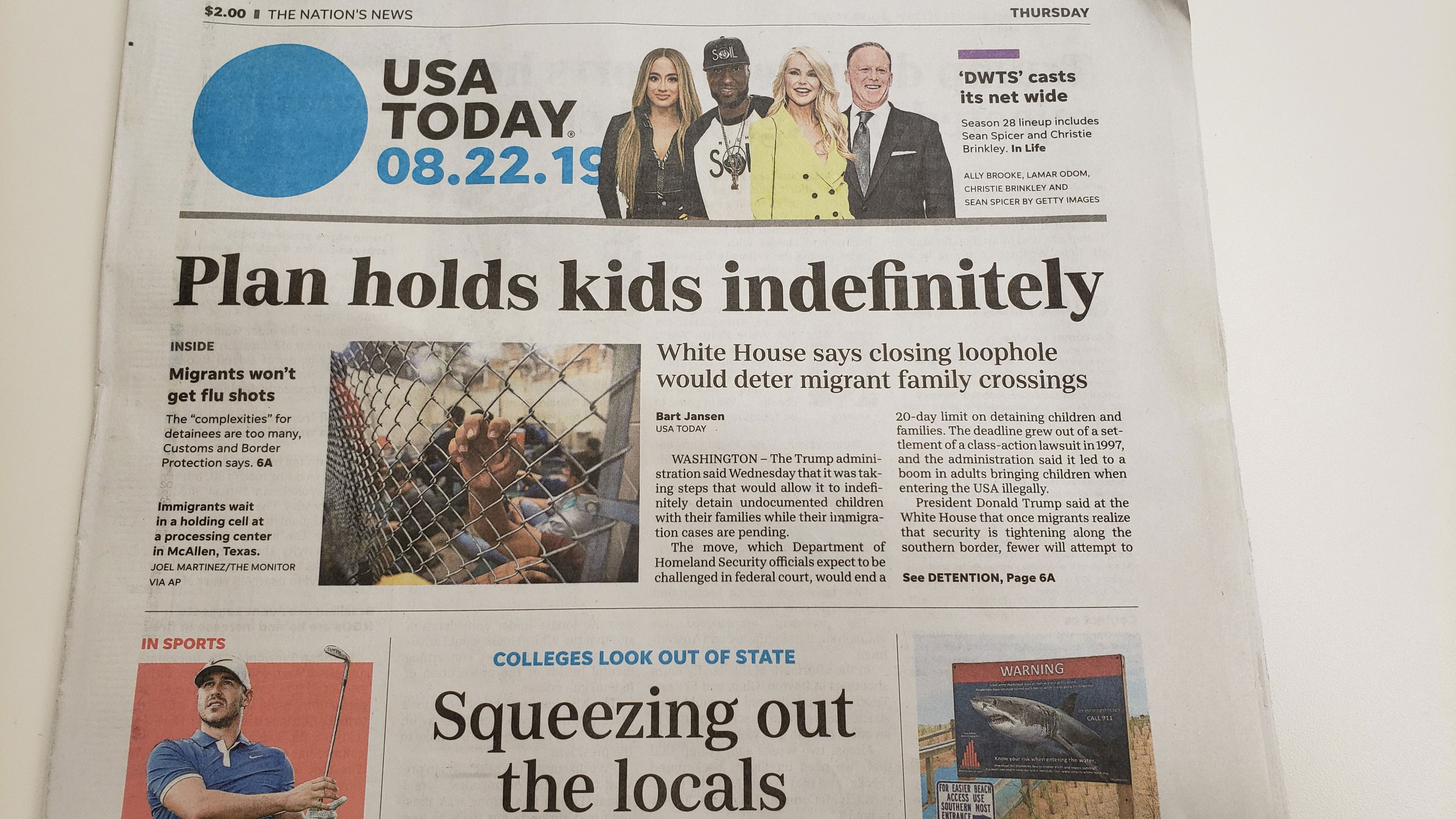 Let that image sink in. As a nation, our Democracy is dying. We the People are extinguishing the beacon of freedom that was the United States. Our country is losing our moral high ground on a global scale and our ability to say, “you can’t treat humans like this.” We have become the enemy of ourselves.

The implications of what we have become will echo for decades. You may read this and go, “I’m white, male, Trump-supporting, agree with all of these actions, and it can’t happen to me.”

Study your history. It can happen to you because, through history, people thought the same thing. It is acceptable right up to the point they are in a concentration camp, or slave labor camp, or forced into conscription in an aborted war. There was no one left to go, “what the Hell, stop this!” Or maybe it will be your child, or your spouse, or your parents who will run afoul of the state.

Here are some facts that should keep every American awake. Immigration and Customs Enforcement operates as an extra-judicial organization and primarily outside of Constitutional protection.

FACT: Immigration and Customs Enforcement has set up checkpoints within this 100 miles zone. They are demanding proof of citizenship and operating outside of Constitutional protections.

QUESTION: If you had to prove your citizenship on the spot, can you? What if ICE says your paperwork is fake aka, “your papers are not in order,” and that you need to go to headquarters, errr detention. Think it doesn’t happen? Multiple United States citizens have ended up in ICE detention and held for months, told they have no Constitutional rights while in ICE custody.

FACT: ICE courts do not roll up into the Judicial branch of the United States government. They are part of the Executive Branch. Yes, that’s right, courts in the United States operate outside of the balance of power, and report directly to the Attorneys General. Run by the Executive Branch, this has created a system that works outside of the Constitution. Judges must meet deportation quotas. There are new rules invented out of thin air, and asylum seekers, even children, have to represent themselves with no translator and no legal council. The appeals process, which provides balance in the Judicial Branch by enabling defendants to argue that laws were violated in making a decision, are little more than kangaroo courts.

FACT: Illegal border crossing and the number of people seeking asylum has skyrocketed under the current administration, the “we must be tough,” polices are not working. Further, the actions taken against the governments of several Latin American countries, obstinately to reduce immigration, has only increased it.

FACT: The seal of decency, the outrage that would typically follow a savage attack on minorities, simply because they were minorities, is gone. The Latino population in the United States is living in fear because of almost three years of exaggerations, lies, and vile hatred directed at them.

All of these actions, all of these systems, this has happened before. Every dollar, the current administration gets, goes to building a private army for the Executive Branch. If fully weaponized, this system could move on almost 70% of the United States population at will. The Executive Branch could detain people into detention camps to disappear among the immigrants, to have cases heard by judges that report to the same branch. Not only are the seeds of dictatorship planted, but they are also growing into a tangled vine. The Legislative Branch is impotent and paralyzed, and leaders like Mitch McConnell are in lockstep alignment with the Executive Branch. You could argue, coherently, that McConnell helped lay the foundation for where we are today.

If you’re not familiar with your history, in Germany, an individual leader didn’t sweep to power illegally. A vote legally made by the Reichstag made him Chancellor. During this era, the political party didn’t openly support or organize violence against minority classes but didn’t do anything to stop it. They used language like “good people on both sides.” The vote by the Reichstag was tainted by the arrest, delay, and detention of politicians that would vote against giving the Chancellor dictatorial powers. However, there weren’t enough votes to stop it. The point becomes only academic.

If you’ve read this far to tell me what an idiot I am, please study your history. The Reichstag fire enabled the mass arrests of Communists, Socialists, trade union leaders, college professors, intellectuals, reporters, editors, and dissenters. Dachau became the first concentration camp for political prisoners. By effectively silencing any opposition by the end of 1933, the ire of the party could then focus on racial minorities, LGBTQ, Romani, the mentally ill, the disabled, Eastern Europeans, and Jews. The Final Solution started in 1942, a full nine years after the first concentration camp opened.

When it came to enforcement of the fascist state, the Gestapo was an organization with roughly 10,000 employees. Yes, you read that right, the secret police in Germany operated with an iron fist with that few people. They used citizens against each other. All it took was to talk ill of the state. But I love Trump! I would never speak evil of him! I am willing to bet that some of the same farmers that threatened USDA officials this week would have said the same thing 18 months ago.

An admission that up to 30% of US farmland couldn’t be planted because of historic flooding, levee collapses, and tariffs would be an admission of things we don’t admit. The farmers are outraged at the USDA because the crop forecast is beyond pure bullshit. The unintended consequence of hiding reality with the doctored USDA crop forecast was a collapse in grain prices. Farmers will get paid less due to the price collapse on a smaller harvest, cutting their profits even more. Enemies of the state – and I’ll repeat it – tariffs are socialism because tariffs represent price controls.

The Executive Branch has directed Immigration and Customs Enforcement to hold families, including children, indefinitely in concentration camp conditions. The due process comes from courts that work for the Executive Branch, where judges have quotas to achieve on deportations. You can’t even say that this is acceptable because “well, it is only illegal immigrants.” Multiple American citizens, including children, have been caught up in this system and held for months. They have been held outside of Constitutional protection and in conditions that violate the Constitution.

We are on the precipice of a cliff that history has shown leads us not to greatness, but as a shattered nation.

Everything you think you know about Thanksgiving is wrong

Remember all the rumors that biker gangs were coming to destroy everyone and everything in CHOP on 7/4?

The group behind the hoax was "Super Happy Fun America"

Two of their operatives were arrested for being part of the D.C. insurrection

NBC News: Two people from Massachusetts, Mark G. Sahady, 46, of Malden and Suzanne Ianni, 59, of Natick, were arrested by the FBI Boston JTTF and charged in the Capitol riot.

The two are tied to "Supper Happy Fun America" the group behind the "Boston Straight Pride Parade".

Our coverage & commentary of President-elect Joe Biden Inauguration starts at 7:30 AM PST on 1/20

7:30 AM Inauguration of President-elect Joe Biden
11:00 AM Wreath Laying at Arlington National Cemetery
12:00 NOON Presidential Escort to the White House