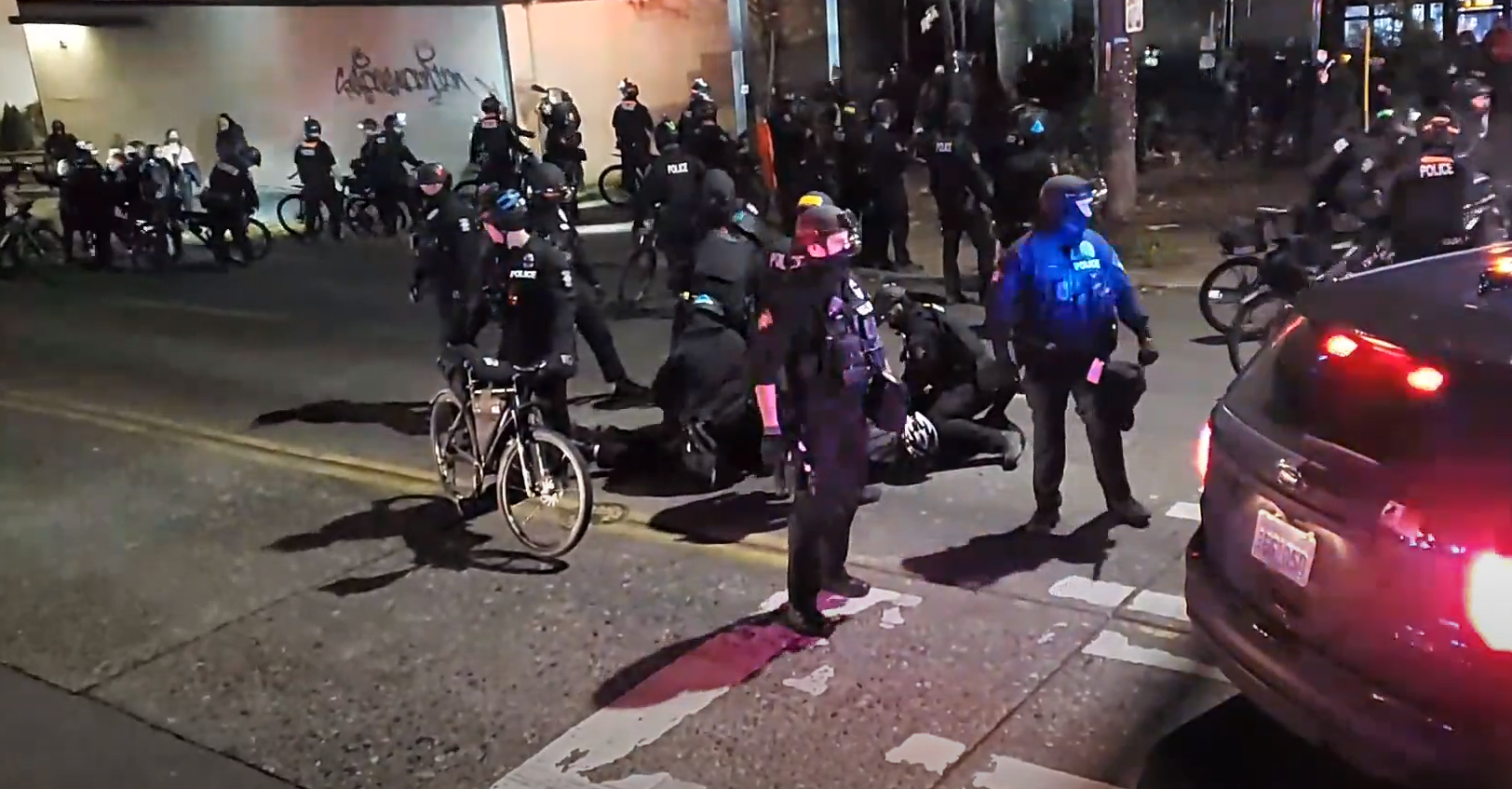 Approximately 75 to 100 protesters marched through the Capitol Hill area on Monday to recognize the 21st anniversary of the WTO riots. The march also marked 180 days of continuous protest in Seattle. The protesters, dressed mostly in black, gathered in Cal Anderson Park before moving over five miles.

With Lt. Diamond on LRAD, Seattle Police arrived within minutes of the marchers moving onto Broadway. The protest continued down Broadway before turning into Seattle University outside of Swedish Hospital. Seattle police declared that protesters were blocking hospital access over the LRAD system, while nearby SPD officers mocked COVID restrictions.

A couple of protesters broke windows at a Starbucks on 12th Ave, while the smell of fresh spray paint hung in the air. Shortly after, Seattle police bike officers started to follow the protest, while a squad of approximately ten officers moved on foot. Seattle police discussed targeted arrests as they closed in on the protesters.

At East Madison Street and 16th Ave, Seattle police took three into custody during the night’s first arrests. During the arrest, someone threw a glass bottle at officers. Using their LRAD, a warning was issued to disperse immediately. SPD claims that multiple bottles and rocks were thrown during the arrests on the Seattle Police Twitter feed. Video taken during the arrests by numerous journalists and streamers do not support their version of events.

The protest snaked through residential areas that Seattle police were pushing the protest group through. Despite moving protesters into neighborhoods, the Seattle police were issuing “apologies” via LRAD for the disruption. Protesters moved dumpsters, construction barricades, rental scooters, and recycle bins into the road to slow SPD officers’ advance.

During the march, Seattle police deployed pepper spray on several protesters, who were seen being treated by medics. There was an additional arrest, however, it was a couple of blocks from the leading protest group. The Seattle Police blotter states the arrest was for property damage.

The protest moved north toward Volunteer Park, passing Uncle Ike’s on 15th Ave East. The group paused only briefly at the controversial cannabis store, where there were sounds of windows being struck. There did not appear to be any broken windows at the store, and the Seattle Police blotter made no mention of any damage.

Seattle Police officers caught up to the protest group and declared the march an unlawful assembly. As the group moved north, SPD maintained less than a 20-foot gap between themselves and the protesters, often only being a few feet away.

During this push by Seattle Police, multiple protesters claim an officer used a racial slur against protesters, calling one of them a n****r. During this same time, we could hear Seattle Police officers disparaging Seattle Public Schools and COVID restrictions in response to a protester chant to the tune of A-B-C-D.

Protesters took a return route to Cal Anderson Park, with significant amounts of graffiti in their wake. Seattle police made one more charge into the protest group, grabbing one individual on the sidewalk and immediately releasing them back into the protest group. The final charge appeared to be an act of unprovoked aggression by officers as the protest was winding down.