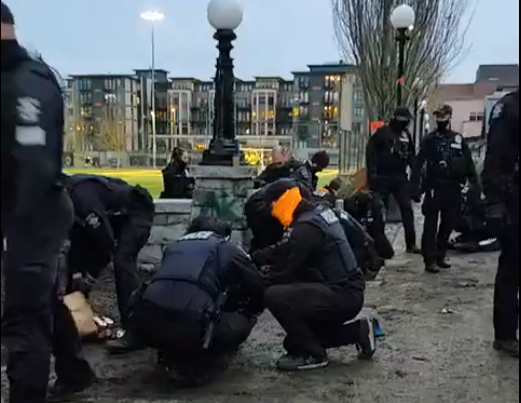 A day after the Seattle Police Department provided security for City Parks to clear a homeless encampment in Cal Anderson, dozens played soccer, tennis, skateboarded, and walked dogs through the closed park. Much of the yellow tape surrounding the park had been taken down or passed under, while area residents walked past large red “Park Temporarily Closed” signs. On Sunday, all that changed when Seattle Police confronted a group of black-clad soccer players, arresting seven.

According to the Seattle Police Blotter, SPD received complaints about people in the park at 4:30 PM. Officers confronted a group playing soccer clad in black. Officers claim an individual spit at them, and during the arrest, six more were arrested for trying to de-arrest the individual. Multiple videos shot from different angles do not support SPD’s version of the story. Independent journalists captured videos of two other people being thrown onto the ground by Seattle Police. In one video, an officer comes from behind, grabs the hood on the sweatshirt, and pulls a man to the ground. In another video, another person is knocked down, striking their head on a pole.

That individual laid unresponsive on the ground for 15 minutes before an ambulance arrived, despite pleas to provide medical assistance. They were rushed to an awaiting ambulance by the Seattle Fire Department, and their condition is unknown at this time. Seattle Police state that the incident was an unrelated medical emergency. This is the third timed SPD has claimed a protester injury is an unrelated medical emergency in so many weeks.

Seattle Police left the scene by 6:30 PM, and there were already others playing soccer and walking dogs within Cal Anderson Park.