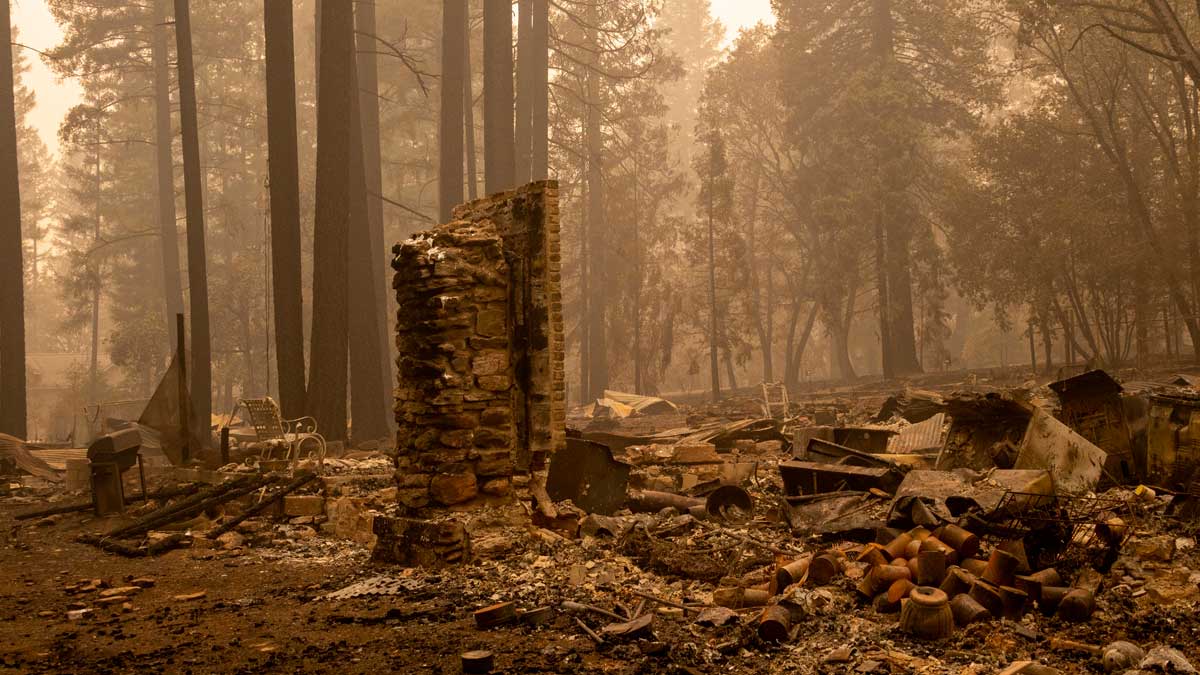 [INDIAN FALLS, Cali] – (MTN) Thick smoke hung heavy in the air creating sepia tones in the hamlet of Indian Falls, California, devastated by the Dixie Fire earlier this week. The tiny village, comprised of less than 10 streets showed the capricious nature and awesome power of nature. As of today, the Dixie Fire has grown to 244,888 acres with thunderstorms in the region whipping the fire into a new fury about 10 miles away, in Quincy, California.

A home would be untouched while the house next door was burned to ash – nothing appeared recoverable in the debris. For the home destroyed, only twisted corrugated metal roofing, half-molten appliances, the occasional chimney, and foundations remained. Fire hoses and couplings laid everywhere, telling a story of firefighters who made a stand until it was completely untenable, dropped hoses, and ran for their lives.

Due to limitations with Google News, you will need to view the photo gallery from a web browser if it is not visible.

In the debris, signs of past lives and lost legacies could be found. In what appeared to be the remains of a garage, two massive tool chests were partially buckled, a few drawers had been pushed open from the heat and deformation. Inside some tools were hopelessly damaged, others only blackened by the smoke and heat. At another location, the remains of exercise equipment told a story of a dedicated workout area now lost forever.

An SUV in the driveway left rivers of aluminum on the ground from where the rims and the engine block had liquified. The engine bay itself was empty, the block disappearing in the fire. Only around the dashboard was any molten auto glass left, the rest had vanished. At this house, the fire was over 1,600 degrees F. In what was a garden, everything was gone, except for a metal welcome sign standing only inches from a blackened tree.

On another street it appeared residents tried to save their cars by parking them on the road – it was to no avail. The utility poles had burned through dropping powerlines onto the cars. Only one vehicle survived – an ironically named Triumph TR7 convertible had light damage despite a power transformer landing inches from it, leaking all of its internal oil, that had also caught on fire. Just down the road were the remains of a Buick that had been consumed in the flames. Just feet away from a burned-out Corvette, a fiberglass boat with a canvas cover had not burned but had extensive heat damage on one side.

The air was thick with smoke, and beyond the sound of fire equipment on Route 89 passing by, there was an eerie, post-apocalyptic silence. Biting black flies flitted by. According to the Department of the Interior, smoke flies are attracted to forest fires because they need to lay their eggs in recently burned wood. The scene could be described as Biblical as light ash rained down.

One property was a series of three buildings. The firefighters saved two. On one building, the heat was so intense the front door melted, but the building survived. Five-gallon jugs of Therm Gel, some still full, were on the edge of the road. It was clear that officials prioritized homes over outbuildings. Only a couple of homeowners will be returning to everything untouched. A large home was unscathed, yet 30 feet away the remains of a station wagon told a story of heat approaching 1,600 degrees.

A resident had pulled some kayaks away from their house into a small glade, it was a lucky decision. The fire had burned every area around it, the ground blackened but the flames never reached two small watercraft. At another home, the remains of the kitchen were apparent by shattered pieces of dishes and crocks, and a few heavy metal pots that had survived. On the ground were stacks of rice paper-thin layers of ash, that disintegrated when you touched them.

The items that remained told the story of lost heirlooms and sudden evacuations. A pot still sat on a stove, almost all that remained in the charred foundations of a home. Laying on the back edge of the oven, a horseshoe that likely was hanging on the kitchen wall, that had dumped out all of its luck onto the lone pot.

In parts of Crescent Mills, California, the fire burned so hotly the forest floor and some of the tree snags were white. The ground was covered in a powdery ash a couple of inches deep. In these places, the fire would have been 2000 degrees F. At the base of a hill, the Crescent Hills Community Center laid in ruins. Two hoses were connected to an outside tap, one had melted and burned through. They told a story of a desperate attempt to save anything before the fire consumed the building. Yet with almost everything burned, a four-wheeler ATV under some trees appeared unscathed.

Up the hill on a dirt road, a small compound of cabins had survived. The fire had burned right to the edge of the property, charring the fence and a no trespassing sign. In the distance was a larger home, with an American flag waving in the wind. I rang a makeshift bell as a sign asked but no one answered. Deep holes were all around in the forest where stumps and roots had burned, collapsing the earth. Every step taken was methodical and planned. Underground, fires burning as high as 2000 degrees were coursing through the forest floor, and will continue to burn until the snows come this winter. One wrong step could result in horrible burns.

Further west near Twain, California, firefighter units from around the country were working collaboratively. Units from St. Helena, Beverly Hills, and Culver City were preparing for a potential defensive battle. The battalion commander from Culver City told me they were refilling the pumper truck from Beverly Hills with water, and setting up a defensive position in case they would be needed in the area. Less than a mile away, two fire units from Klamath Falls, Oregon, were also in position. Near the Twain General Store, fire trucks and other equipment moved through at a steady pace to take on diesel fuel and gasoline.

Along Highway 70 and Highway 89, red-stained trees and infrastructure showed where tankers had made airdrops of water and fire retardant earlier. There was no sound of aircraft today with the active fire 12 miles away to the east, and thick smoke making air operations challenging.

According to KPIX in San Francisco, firefighters were battling new downdrafts caused by thunderstorms increasing fire activity. Units are reinforcing tenuous fire lines in anticipation of a shift in the weather, that will bring with it extreme fire behavior.

As ash lightly falls from a silent orange sky, the air thick and stinging your eyes, an American flag waves over the burned-out remains of a house in Indian Falls. The long hot summer and years of drought continue, with the land waiting for the winter snows to bring final containment.