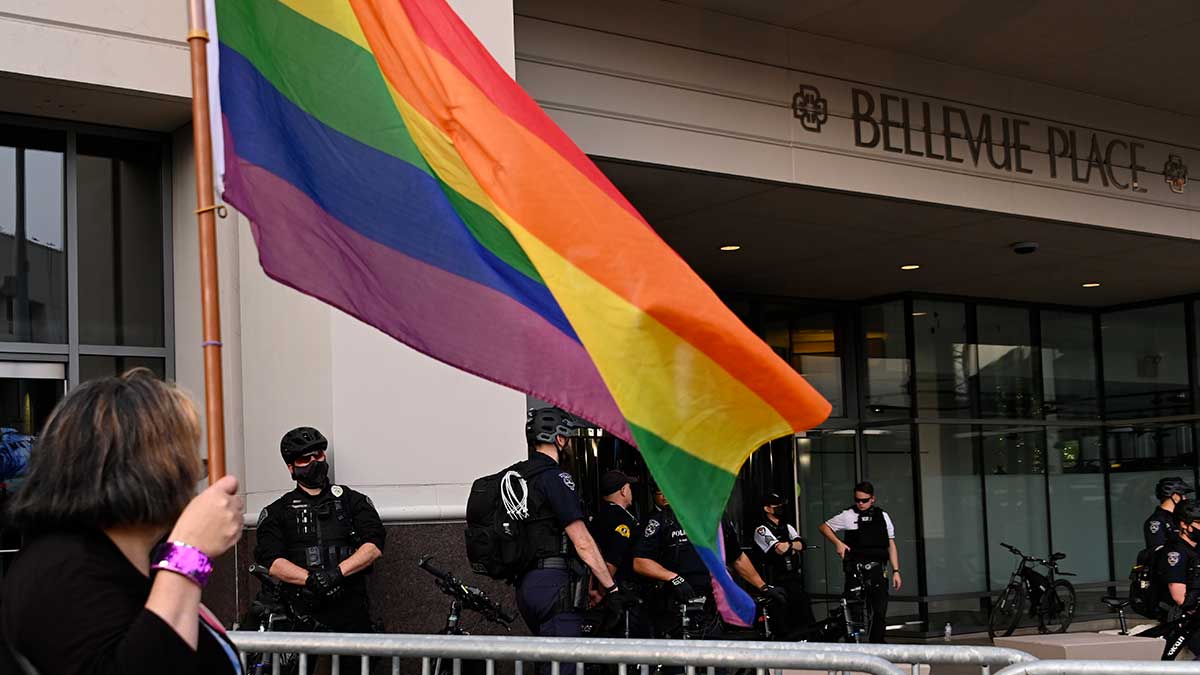 The Hyatt in Bellevue closed off their driveway and indicated the parking garage was full, while private security walked the lobby and outside in high visibility vests. The parking garage closure appeared to be a security measure as Bellevue Place parking was open, and the Hyatt parking areas were nearly empty.

Later in the evening, concrete barricades appeared in front of the Wintergarden Entrance to the hotel. According to Bellevue Police PIO Meeghan Black, Franklin Graham’s team handled security at the Hyatt.

Outside at Bellevue Way and 8th, a group of 20 to 30 in support of the LGBTQ community protested Franklin Graham holding signs and flags while a news helicopter hovered overhead.

Around 6 p.m., counter-protesters aligned to right-wing causes and Back the Blue arrived. One person walking to join the group said to a middle-aged woman, “Get out of my way. My dog doesn’t like homos!” That person joined the group of pro-police protesters. One person tore down signs that had supportive messages for the LGBTQ community.

Inside the Hyatt, things were quiet, with attendees for dinner trickling in. Most were not wearing masks, and in one incident, a person was asked to wear a mask but refused and continued to the dinner location.

The corner of Bellevue Way and 8th had approximately a dozen people waving flags in support of the police. At least two individuals were flashing white power symbols, and one chanted, “back the yellow,” a rallying cry used by the Proud Boys on January 6 during the Washington D.C. insurrection.

About a dozen police officers on bicycles rallied at the Hyatt and then moved to Bellevue Place, watching the group. Bellevue Police drove by several times, taking pictures. Among the small group of right-wing protesters was Turning Point USA social media firebrand Katie Daviscourt and, arriving later in the evening, Tim Eyman.

Taunts between the two groups were exchanged, and the police moved a phalanx of bike officers between the protesters, closing the intersection. The group in black set a small American flag on fire at the edge of the street while Bellevue Police made multiple announcements through their LRAD system, including stating in one of them that “arson is not protected free speech.” The Bellevue Police Department Twitter feed shows a picture that appears to have been taken from a drone or office building.

At the same time, an officer took photographs of everyone present, including a growing group of bystanders watching the events unfold.

Around 9:10 p.m. Bellevue Police announced they were reopening the intersection to traffic. Shortly after the police retreated, the two groups converged and exchanged words. Bike officers moved back to separate the protesters.

By 9:45 p.m., the area was quiet again. Security had a high presence within the lobby of the Hyatt. The BGEA had planned initially for 2 police appreciation dinners, with the second on May 12, but it appears that has been canceled. According to the BGEA, Franklin Graham will be in North Carolina at 8:30 a.m. on Thursday to host a police appreciation breakfast.

Bellevue Police report there was an arrest of a 32-year old Lynnwood man for third-degree assault. The man was booked into King County Jail and police officials reported the arrest was not related to protest activity. [an earlier version of this story indicated that further information was pending] There were no other arrests last night.

We had previously reached out to the Bellevue City Council and the Bellevue Hyatt for comment, and neither responded to our request.

No, you don’t need to panic buy gasoline or diesel fuel, and no one needed to either