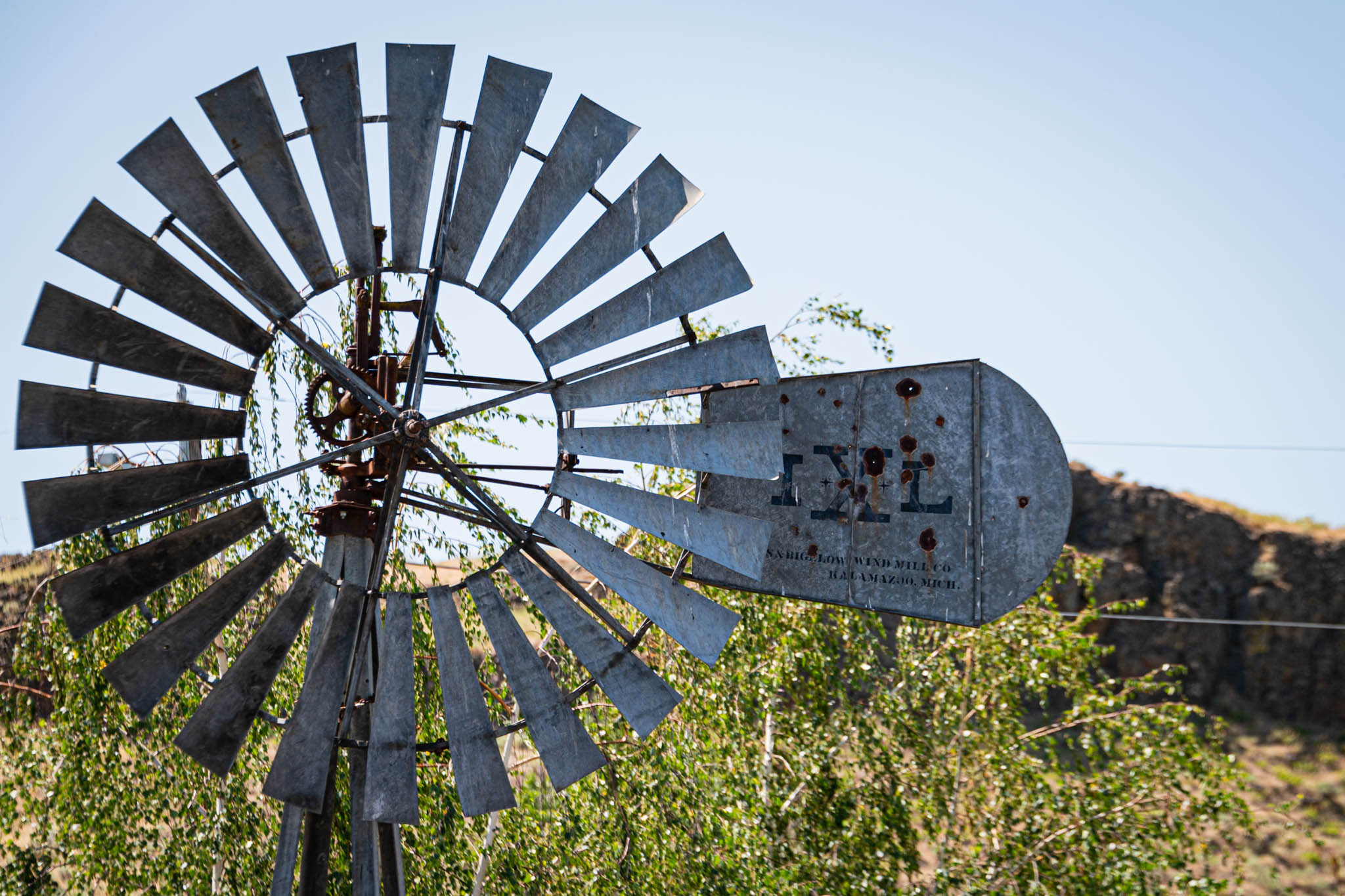 Last spring, before COVID, before George Floyd, before the recession, my wife and I took our annual photography trip to the Palouse of eastern Washington. Littered with dying rural towns, southeast Washington is one of my favorite places for photography. I love wide-open spaces, rusty objects, and abandoned buildings as subjects. This region is an area of expanding food and banking deserts and still impacted by data deserts.

The issue of food deserts and banking deserts in America was a dominant topic up until the events of the last six months. A food or banking desert is where the nearest grocery store and or bank is a mile away in an urban and suburban setting and 10 miles away in a rural setting. According to the National Institutes of Health, there is a direct correlation between obesity and food deserts.

The issue of banking deserts is a more recent trend. As I write this, 25% of American households are unbanked or underbanked. Banking deserts create a significant issue for those who don’t have ready access to online banking, burying them in fees. Since 2015, only one state, Rhode Island, has seen the number of in-person banking locations increase.

The rural town of Itta Bena, Mississippi, is a textbook example of a banking desert. The town has no bank and four ATMs. One offers no-fee withdrawals but is chronically out of cash. The other three machines have fees from $5.00 to $7.50. On the worst days, all four ATMs are out of service because they are empty.

A check on Yelp indicates that Planters Bank is still in Itta Bena. However, the Planters Bank and Regions Bank websites indicate there is no such branch (Regions acquired Planters in 2004). In Itta Bena, like other rural towns, cash is king. The remaining businesses don’t have enough credit to accept credit cards, don’t want to deal with fraud, or don’t have the margin to pay the transaction fees.

Why are grocery stores and banks closing in such dissimilar areas – inner-cities and rural towns? Profit. In Itta Bena, Mississippi, it cost Planters about $200,000 a year to operate the small branch, which ran at a loss. The decision to close the branch in 2015 was to save money.

After nearly a decade of decline, the population in rural areas started to grow again – barely. In the 2016-2017 period, the rural population in the United States increased by 33,000 people. However, the raw numbers only paint part of the picture. When you look at ethnicity, almost all of that population growth has come from Indigenous and Hispanic peoples. The Caucasian population continues to crash while the Black community has had a smaller decline.

Just like in the inner-cities, where banking and food deserts are well documented, corporate America is abandoning rural America. In some areas where Walmart crushed regional Main Streets in surrounding towns two-decades ago, Walmart is now closing (it is worth noting that Walmart has also permanently closed suburban and urban locations). When Walmart became too expensive for the local population, Dollar General or Family Dollar moved in.

It’s easy to dismiss this as “This is just competition! Why do you hate capitalism!” I don’t, but I do hate capitalism run amok. When Dollar General came to Mowville, Iowa, it opened right next door to the only grocery store within a 30-minute drive. Business at the store dropped 20%, and with margins thin in grocery, they boarded up with no replacement. Want a head of lettuce? An onion? An apple? You’re now going to need to drive to Sioux City, Iowa, and lose an hour of your life on the road. Being poor in America is expensive and time-consuming.

Do they sell a variety of food and options that aren’t heavily processed? Barely. We know this dance music; the local stores close, jobs are lost, minimum wage jobs replace them, product selection decreases. In the heart of Iowa, you have to drive 30 minutes to buy lettuce – take all the time you need to unpack that.

Now we go back to the Palouse, which is another part of the American breadbasket where wheat fields dot the landscape as far as the eye can see. On the edge of that Washington wheat belt sits the town of Washtucna, a dot on the map about 28 miles south of Ritzville. One year when a nervous farmer drove out to ask what we were doing, he told us they grew four kinds of things out there, “wheat, wheat, wheat, and wheat.”

Wastucna got the first Post Office in Adams County in 1882, and the railroad arrived in 1886. The town prospered until the end of the 20th Century when wheat prices dropped, the harvest was poor, and the dotcom recession rippled across America. The town population has plummeted to just 208 people. The per capita income is $17,487, and the median household income is $34,688. For comparison sake, the median household income in Mississippi is $43,000 per year.

The town once had a grocery store, bank, and even a Chevrolet dealership. Now Main Street is boarded up. The last vestige of employment, a restaurant that was well known for great food, had a fire in 2018 under questionable circumstances and remains closed. Groceries? A local gas station has a small offering in a back room, take-out food, and a coffee stand. Bank? The same gas station has an ATM.

The nearest grocery store is 28 miles away, and the nearest bank is in Connell, 33 miles away. Unemployment in Adams County was already almost double Washington state before COVID struck. To inner-city America, they already know this dance music.

“Just sell your home and move!“

Sell your home to whom? At how much of a loss? To sell something, you need a buyer, and relocating closer to Yakima, the Tri-Cities, Spokane, or Puget Sound requires capital. For the 200 plus that still calls Washtunca home, they are trapped.

America’s inner-city communities might be reading this and thinking, “Crying me a river; that’s been our reality for decades.” Now we get to the punchline. Rural America is frightened because of the changes happening outside of their control. The population is aging, and the groups that are keeping the population in check are minorities. The mills, the factories, the rail depots closed decades ago. Small farms continue to collapse, inhaled by corporate farms or sit fallow, for sale, and under bank control.

In inner-city America, jobs, and infrastructure disappeared with the white flight of the 1960s and 1970s, and never really returned. While rural America waits for greatness, coal jobs have continued to sink, and in states that flipped from blue to red in 2016, none have seen manufacturing jobs grow. U.S. farm bankruptcies reached the highest level since 2011 in 2019. Even before COVID and the 2020 recession, rural America experienced a significant spike in suicide. Rural America leads in the abuse of opioids and methamphetamine, has the second-highest rate of alcohol abuse by 12 to 20-year-olds, the highest rate for binge drinking, and the highest rate for cigarette smoking and smokeless tobacco use.

The evidence is clear that as a whole, rural America is dying. There are pockets of rural success, such as DeWitt Arkansas. Still, for each DeWitt, there are a dozen Washtucnas. With each gasp from rural America, the rage increases. Corporate America interests have their knee on rural America’s neck. Instead of saying, “I can’t breathe,” rural America seems to be saying, “More weight.“

There is an old saying; a rising tide lifts all ships. Rural America needs to consider that the fight for equality by Black Lives Matter is a fight they should support. The same playbook that subjugated the inner-cities and with it a wide swath of BIPOC America is in use against rural America.

The same playbook – predatory banking, high fees, no access to healthy food, limited healthcare that is low quality, the marketing machines of corporate America telling you to spend your money on slow suicide. Corporate interests have crushed the mills, farms, factories, and small businesses that were your economic engines. Your students learn in low-quality schools lacking educational basics like high-speed internet access and STEM resources. They can’t compete in a college environment. The jobs? They aren’t coming back.

The warning bells of the decline of rural America have been clanging for decades in pop culture and music. From Randy Newman’s Baltimore, The Pretenders’ Ohio, and Bruce Springsteen’s Death To My Hometown. In parallel, Black musical artists have sounded the alarm through music since Edison created the phonograph. In more modern times, this includes Marvin Gaye’s masterpiece album, What’s Going On, NWA’s Straight Outta Compton, and Ghetto by Akon.

History has shown that when changes are made to support BIPOC people, all races improve. Without change, food, banking, and data deserts will continue to grow in rural America. Washington D.C. nor corporate America are coming to save you. On the contrary, they are bleeding you dry.

An Open Letter to CHOP