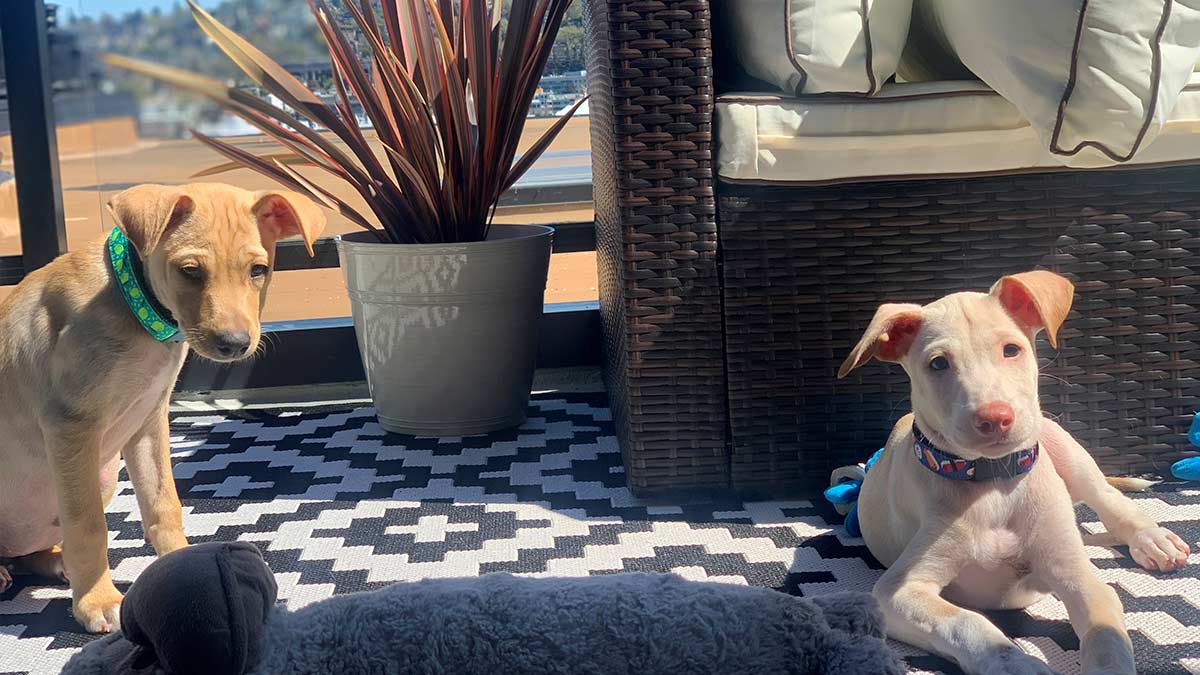 [SEATTLE] – (MTN) At the end of World War II, countless dogs that were used to sniff out bombs and hiding Japanese soldiers were left behind on the island of Guam. The population exploded unchecked, and Guam became overrun with a unique mixed breed known as Boonies.

Guam is estimated to have 167,000 residents and 25,000 to 60,000 stray Boonie dogs. Frustration has boiled over with some residents and leaders. As recently as 2019, there have been suggestions to do annual hunting derbies to control the population. Hunting of dogs was never ratified. Instead overwhelmed officials are spaying and neutering dogs and cats before sending them back out onto the streets. The severely sick and injured are humanely euthanized, with the island working to maintain a no-kill policy whenever possible.

Ashley Ridley-Smith, co-owner of Sugar & Shears Spa in Seattle, is passionate about finding the Boonie dogs new homes. ” Unfortunately, Guam has a problem with animals. There’s over 60,000. A lot of street animals that need forever homes, love, and fosters,” Ridley-Smith explained.

The Boonie Flight Project is working to fly dogs to the United States mainland to awaiting foster families and owners. The first official flight happened on April 10 and the next flight is coming up on April 24. The journey isn’t an easy one.

“They just started the Boonie Flight Project, which is a charter flight that brought 25 dogs,” Ridley-Smith explained. “A lot of puppies all the way to Hawaii and it wasn’t cheap. It was a lot of work on the end of Guam and they pulled it off and they plan on doing it regularly until they can get this situation under control.”

Prior to COVID, Delta and United Airlines had regular service between Guam and Hawaii. Due to the sharp decline in travel, Delta suspended service. United Airlines suspended the transport of all animals, even for US service members and their families. The only way an animal can get on or off Guam is on a charter flight.

The Boonie dogs are carefully stored in crates for their charter flight to Hawaii. Hawaii maintains strict protocols for animals coming to the islands because rabies is not present on the archipelago. Guam also does not have rabies. However, the dogs still have to go through USDA inspection upon arrival. That can last 12 to 48 hours and during that time the dogs are not allowed to leave the facility. They are well cared for including being able to relieve themselves, getting fed, and having plenty of water. From Hawaii, they head to the United States on commercial flights, including Seattle.

Guam has a single animal shelter for dogs and cats that is incapable of handling the decades-long crisis, and the government of Guam, a United States territory, has long been accused of not enforcing existing animal control regulations.

Ridley-Smith explained, “These wonderful people on Guam have taken it upon themselves to figure out another solution that’s really working. They were able to get 25 dogs here and they have another plan on April 24 with tons of puppies looking for their forever homes.”

We had a chance to meet Pineapple, Frank, Cream Soda, and Lemon, who arrived last week. Each dog had unique personalities – Frank was laid back and fell asleep in Ridley-Smith’s arms while Cream Soda had a mischievous sparkle in her eyes. Frank has already found his forever home. “Frank is now mine,” Ridley-Smith said, “and his three sisters are ready for adoption. They were found in a box at two weeks old. So their fosters on Guam had to bottle-feed them.”

It costs approximately $1,300 per adult dog and $600 to $700 per puppy to fly them from Guam to Hawaii safely and humanely and the operation is run on donations. Ridley-Smith told us that adoptees sometimes sponsor a dog for their travel expenses, while others donate to help these pups find a forever home.

You can help local efforts, become a foster, or apply to adopt, by visiting the Go Fund Me for Guam Puppies Need Homes or visiting the Boonie Flight Project on Facebook.