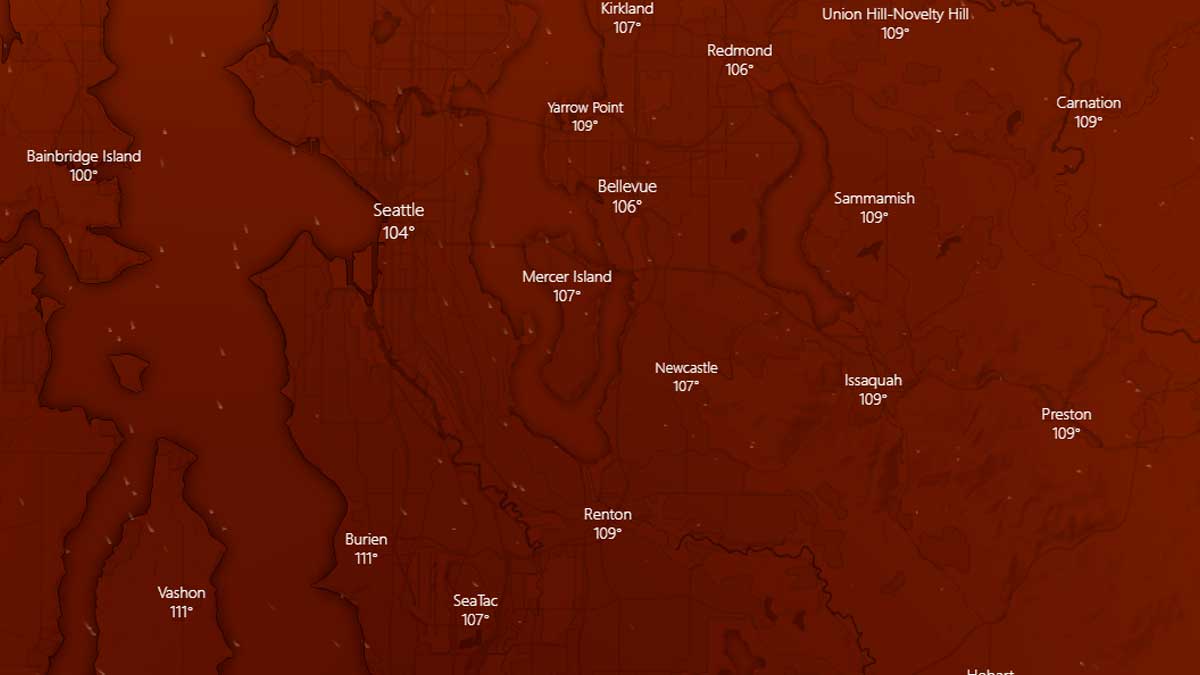 [SEATTLE] – (MTN) Seattle officials gathered to outline the city’s planned response for the historic heatwave that will bake our region in the coming days. The city has activated the Emergency Operations Center and is working on a multiagency response to protect vulnerable residents of the area.

The National Weather Service issued an Excessive Heat Warning this afternoon, effective from 2 PM Friday to 9 PM Monday. Forecasters stated in today’s press conference, “we have never seen data like this before.” Forecast models indicate that Monday could soar to 108 degrees, which would shatter the all-time record high set in 2009.

A 24-hour emergency shelter will be opened at the Fisher Pavilion, which can accommodate up to 73 people and will be managed by the Salvation Army. The city is scrambling to open as many libraries as possible but is struggling with staffing the locations. The plan calls to have 7 libraries, including the Central Library downtown, open on Saturday, 5 on Sunday, and 3 on Monday. Later in the week, the city hopes to have 6 to 10 libraries open daily. An exact list will be available on the Seattle Public Library website.

Seattle’s Senior Centers have been closed due to COVID. The city is working to open the Greenwood, Pike Place, West Seattle, Southeast Seattle, Central Area, and Wallingford Community Senior Centers. People are advised to call ahead to confirm hours for each day. The city already started distributing fans to vulnerable seniors earlier this week.

Seattle City Parks and Recreation will have 8 of the 9 area beaches open starting on Saturday from 11 AM to 7 PM. The only beach closure is East Greenlake, but West Greenlake will be open. A spokesperson stated the reason for the closure was due to staffing. Additionally, the city is reopening indoor and outdoor pools, wading pools, and spray parks to the public. The 11 wading pools and six spray pools will be open from noon to 7 PM. The city’s two indoor pools and two outdoor pools will be open following their normal schedule before COVID closed the facilities down. Mayor Durkan stated that 100 public drinking fountains are now operational in the city, and they are working around the clock to turn and fix as many as possible.

Seattle City Parks also asked parents to test surface temperatures of playground equipment and surfaces to make sure they are not too hot. A spokesperson stated it could be possible to get burns.

The Seattle Fire Department has suspended training for the weekend to provide the maximum staff level and will distribute water to the public from 9 AM to 6 PM. Both Health One units will be operating over the weekend. COVID testing and vaccination sites will operate as planned, including the planned pop-up vaccination centers at Seattle Pride on 11th a the corner of Cal Anderson Park from 1 PM to 5 PM on Saturday. The HOPE Team will be performing welfare checks on the elderly and the unhomed.

Seattle City Light believes that the electrical grid will not be overwhelmed with this heat event, with peak usage typically in the wintertime. A spokesperson indicated that historically the highest demand used 75% of capacity, and summertime demand typically peaks at 50%. They will be monitoring for any possible wildfires that could threaten transmission rights of way. Finally, all planned outages for maintenance this weekend have been canceled.

The city has canceled all planned road projects this weekend (state projects may still go forward) and will be spraying bridges with water to prevent them from warping or the surfaces buckling due to the heat.

Employers who have people work outside or in non-airconditioned facilities were urged to allow workers to take frequent breaks in cool or shaded areas and have drinking water available.

Updated for Tuesday: Cities open up cooling centers across the eastside