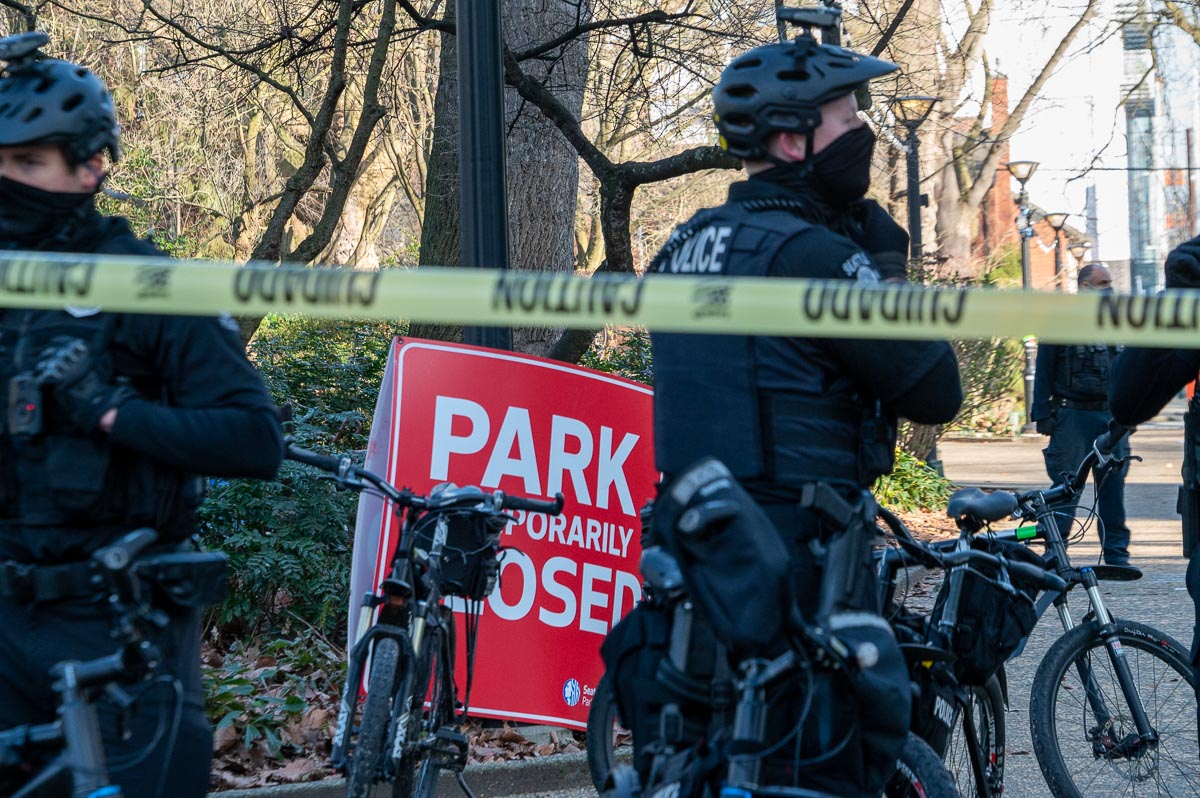 [SEATTLE] – (MTN) Seattle Parks supported by the Seattle Police Department completed a homeless sweep of Denny Park on Wednesday. City officials put notices up of the impending sweep several days ago, when the park had approximately 70 tent encampments. By early this morning, approximately 15 tents remained as Seattle police and parks crew, some wearing hazmat suits, gathered inside the park around 8 AM.

At 8:45 AM officials started to secure the park, while some of the remaining unhomed residents packed belongings or started to move to grassy areas just outside the park. Activists and mutual aid arrived, with some shouting at and heckling Seattle Police officers, drawing two squads of bicycle officers. Others associated with mutual aid brought replacement tents, hand warmers, heaters, and propane, while others helped pack belongings and load them into awaiting cars and vans.

City officials claim that the number of calls and complaints around Denny Park was increasing, as justification for the sweep. The city initially touted success in finding housing and hotel rooms for many of the people initially in the park, but further probing indicated that for most, March 15, will find them back out on the street.

People we spoke with across the political spectrum, including an SPD officer, expressed frustration with city leadership and the temporary nature of solutions offered. There was strong agreement that permanent housing solutions and medical care were needed. The city and the organizations they support largely focus on temporary housing and short-term programs, while long-term care and housing remain grossly underfunded. One man who claimed to be a business owner got into a shouting match with an activist, threatened him, and then drove around the block to confront the group. After a tense exchange we spoke of frustration, but only offered a solution of shipping the unhomed to Yakima to, “pick apples and cherries.”

Seattle officials did appear to apply a lighter touch during this sweep. For some people residing in the park, employees helped them move belongings to be picked up and relocated and waited while others packed belongings. One Seattle Police officer engaged in what could be described as constructive dialog with activists, despite little common ground being found. In contrast to a more community-oriented approach, in other areas of the park, city workers dumped the belongings of tents onto the ground and then gathered them up as trash, making no effort to review or catalog personal belongings.

The city of Seattle through public and private investment spends $1 billion a year in the battle against homelessness. Despite almost $85,000 per unhomed person available annually, Seattle has made little progress on solving the crisis. City officials swept Cal Anderson Park on December 18, 2020, only to have some people move to Miller Playfields and others move to Pioneer Square. Cal Anderson Park doesn’t have a significant homeless presence while business owners in Pioneer Square are complaining about a spike in encampments.

City officials state Denny Park will be closed for months for repair and rehabilitation. However as night fell, the yellow security tape had been torn down in many areas and area residents were ignoring the park closed signs.

Accused International District attacker has a violent past