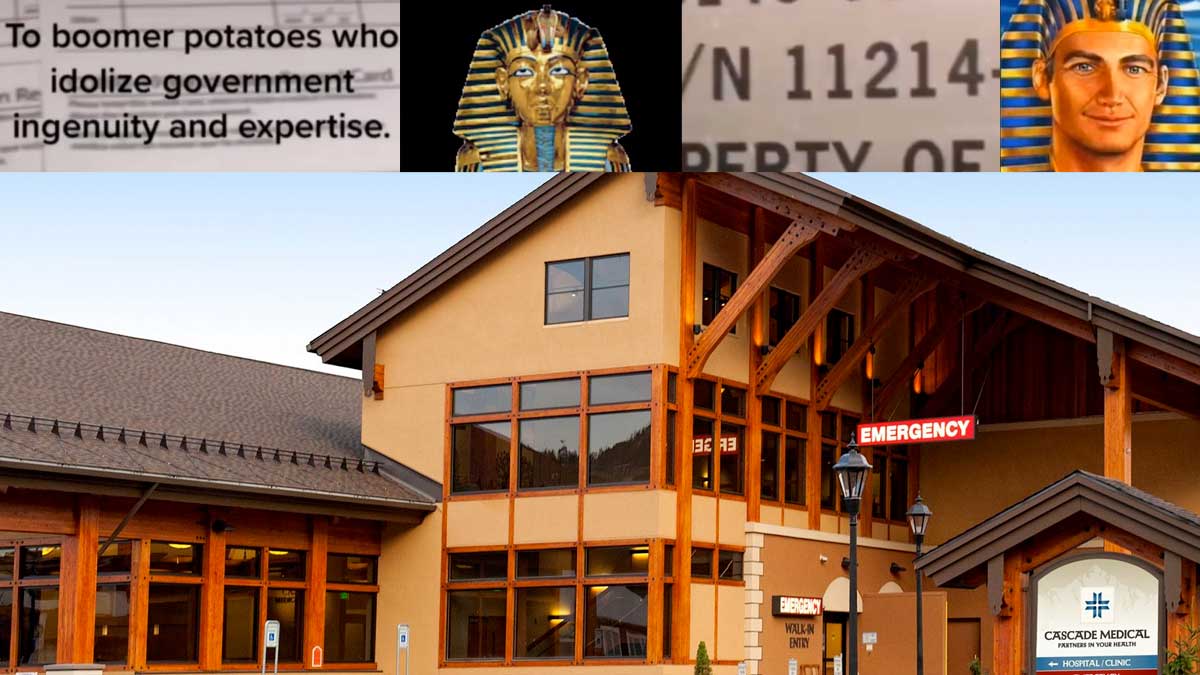 [LEAVENWORTH, Wash.] – (MTN) He went by bloodytnvc5 on Tik Tok and was infamous for using a Pharoh’s face and headdress as his alter ego and for wearing blue medical gloves. A three-month investigation would reveal one of the most prominent creators of hate and Covid-19 misinformation on Tik Tok was a cook at Cascade Medical Center in Leavenworth, Washington.

Cascade Medical Center, a 25-bed acute care hospital nestled in a Bavarian-themed town in the Eastern Cascades, fired two employees earlier this month, according to the Director of Public Relations, Clint Strand. Matthew Wilson of Leavenworth, 33, and Alyssa “Lyssa” Riggs of Cashmere, 21, presented themselves as a doctor and nurse on social media, leaving a trail of destruction in their wake.

Wilson was meticulous in hiding his identity, using the Pharoh’s face and only showing his hands, encased in blue medical gloves. He would use a whiteboard to share his content to bypass artificial intelligence moderation while filming himself in examination rooms and surgical suites. His videos frequently used medical equipment as props. As Wilson and Riggs spread their lies, residents of Chelan County were flooding the emergency department gasping for breath, infected with Covid-19.

After months of investigation, Tik Tok creators ThatDaneshGuy and Guilt, along with a team of researchers, tracked down Riggs. Once they discovered her identity, they learned Wilson was the man behind bloodytnvc5.

For months, Wilson, with help from Riggs, created thousands of videos seen by millions of people. Along with medical misinformation, Wilson spread hate and intolerance unchecked by Tik Tok and its moderation staff.

He claimed to have acquired a military “explosive device,” even showing the serial numbers as proof in one video. Investigators concluded the serial numbers were not related to any kind of explosives or component to a bomb but a commercially available gun rack. Despite the bold claims, Tik Tok allowed the video to be viewed and shared by hundreds of thousands.

Content included sharing Nazi images from World War II and tap dancing around the edges of content guidelines while attacking Jews. He created sexist content within the walls of Cascade Health while sharing images and boasting he allegedly owns illegal firearms. Incredibly, he offered to sell fake vaccination cards with impunity from Tik Tok management.

While wrapping himself in patriotism, white nationalism, and a love of the Second Amendment, he pushed medical misinformation. Covid-19 was a hoax, Covid-19 wasn’t that bad, the vaccine was gene therapy, and the government is out to control everyone. His smooth voice and presentation, the gloves, the medical gear, and what appeared to be an understanding of medical terminology made him credible to his audience. His core audience was already thoroughly indoctrinated in medical misinformation and hungry for content to fuel their confirmational bias.

Additionally, he brutally attacked Black people and Black culture. But Wilson had a secret behind his online persona, and a trail of tiny breadcrumbs led to his downfall.

Wilson and Riggs made one critical mistake, each in separate videos, despite efforts to hide their identities. Additionally, Wilson left a trail of smaller clues that led to his identification.

Riggs revealed herself in a single video dressed as a nurse wearing a surgical mask and glasses. A graduate of Cascade High School in 2018, Riggs was feted by former Leavenworth Mayor Cheri Kelley Farivar in 2017 for being part of “Citizens of Washington in a Contemporary World.” According to LinkedIn and WenatcheeWorld, Riggs was on the dean’s list at Wenatchee Valley College, where she studied dental hygiene. The Washington State Department of Health Provider Credential Search portal indicated Riggs does not hold a license in any dental or nursing discipline.

Wilson went to great lengths to hide his identity, and attempts to find him by cross-referencing other social media channels were fruitless. He likely never considered the unique architecture of Leavenworth would provide the critical clue that would end his reign over social media.

Leavenworth, Washington, was founded as a logging town located on a railroad line. The town boomed through the late 1800s into the 1940s. Timber for construction, aircraft manufacturing during World War I, and a need for wood during World War II brought prosperity to the region. After the war, the railroad moved the line, bypassing Leavenworth and the town’s economy collapsed. By 1960, it appeared Leavenworth would disappear off the map.

City leaders came up with an idea to revitalize Leavenworth that forever changed the community. They adopted building codes to match Bavarian architecture and turned the town into a German-themed tourist destination. Almost overnight, Leavenworth became a picturesque mecca nationally known for Oktoberfest, Christmas lights, and the closest village to Stevens Pass and its ski area. Located just a couple of blocks off U.S. Route 2, Cascade Medical Center adopted the same Bavarian architecture when it was built. The unique construction requirements would be the undoing of Riggs and help identify Wilson.

In another video, Wilson revealed a distinctive area of Cascade Medical Center for a brief moment, showing the exposed beam German-inspired architecture. From that single view, investigators identified the facility.

Human resources at Cascade Medical Center was able to identify Riggs when researchers presented their findings, including the small video clip where she appeared just once. There is an old saying that there is no honor among thieves. When Riggs was confronted by Cascade Medical about her online activity and was accused of being the person behind bloodytnvc5, she gave up Wilson.

The hospital told the team of Danesh and Guilt, two employees were fired, and they waited for the story to break in the news. They believed they had revealed a doctor spreading medical misinformation, selling fake vaccination cards, and spreading racial hatred – but the news never came.

Investigators went back through the cesspool of content they had gathered, looking for any additional clues for the true identity of bloodytnvc5. The deeper review discovered Wilson had made a critical error in a single video. Ironically, the historical roots of Washington state being part of the Oregon Territory when the Black Exclusion Act was passed in 1844 worked against him.

Almost 200 years later, Washington state is only 4% Black, while the United States is 13%. In a single video, Wilson forgot to put on his blue medical gloves revealing his race. Wilson is Black and lives in a community with 2,057 residents – slightly more than one percent are Black. Investigators believed they were looking for a Black doctor because Wilson presented himself as a medical expert with access to exam rooms, surgical suites, and medical equipment with apparent impunity.

Sprinkled among Wilson’s misinformation, weapons violations, selling fake vaccination cards, and racial hatred, there were morsels of content about food. The pieces of the puzzle started to fall into place. Scanning through photos from Cascade Medical Center, investigators had an epiphany. Wilson was in plain sight the whole time, but he wasn’t a doctor or even medically trained – Wilson is a chef. In one photo provided in hospital marketing materials, Wilson’s name was clearly visible on his employee badge, wearing a chef’s uniform, smiling over a table laden with food.

Despite being Black himself, Wilson expressed racial hatred and mocked Black culture. Some of his tamer content can still be found on (parental advisory, not safe for work) the website iFunny, including an iteration of the Pharoh iconography he would use.

Wilson and Riggs were both terminated from Cascade Medical Center, but they have not faced additional consequences for their actions to date. Wilson boasted of having illegal weapons in his possession and provided pictures. However, his whole persona online appears to be a complete illusion.

Wilson allegedly has been reported to the FBI, ATF, and local animal control for the crimes he self-documented on social media. An inquiry is being made with the Washington Department of Health to determine if the state will investigate Wilson, Riggs, or both for impersonating a doctor and nurse, respectively. Because this story broke over the weekend, we plan to reach out to the Washington Department of Health on Monday.

Riggs doesn’t hold any medical license (to the best of our research abilities) in Washington state. In theory, if she has completed her education in dental hygiene, she could become a licensed medical professional in the future.

ByteDance has never responded to multiple inquiries we have made about other medical misinformation creators on Tik Tok that operate with apparent impunity on the platform. Wilson and Riggs will likely maintain a low profile, but plenty of other videos already exist spreading harmful content.

We would like to thank ThatDaneshGuy, the creator Guilt, and their researchers for sharing their content with Malcontent News.

A little brown pill could be a giant game changer – local and national update for October 1, 2021